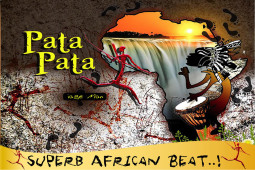 We ran an article recently about the absence of the gaming culture in Zimbabwe. I am excited to say I was wrong. There are some local game development studios that are not just raring to develop the next best seller but have already made a footprint into areas like Silicon Valley and gained commendation as a Southern Africa Feature on the Apple app store.

I am talking about Harare based, mobile game, social and business apps startup Saintoon Studios, which developed Pata Pata, a game that that was exhibited at Apps World 2014, in San Francisco. The same app was featured by Apple as high profiling for the Southern Africa Market.

We caught up with Jim Katurura (Saintoon Studios Founder and CEO) who informed us that contrary to what I had bemoaned as the lack of a gaming applications, they have developed a series of five iOS games so far.

The most successful is Pata Pata, a snakes and ladders type of board game that’s played on a rock painting board through which one can experience Africa’s tourist attractions as they roll dice and play. I had a chance to sample the game which has a 2.5 out 5 rating and recognised how the startup has made the strides that they have made in the tourism sector with its unique Afro-centricity.

Locally their success story has consists of the Zimbabwe Tourism Authority’s Sanganai –Hlanganani World Travel Expo App.  They were also chosen to give a presentation on the “Importance of ICT in tourism at the Youth in Tourism conference for the SADC region at the Regional Tourism board RETOSA event in Mauritius last April.

The other games they have also developed are Piggy-back ride, Fruits Faces, Bugs smasher and No one death which are also available for free on the app store.

Saintoon Studios is working on 4 more game Apps for iOS and Android which will be released in the next few months which in my opinion will do them well as the Apple community is rather small in Zimbabwe.

Let us know how you like their games and development if you have come across Saintoon.