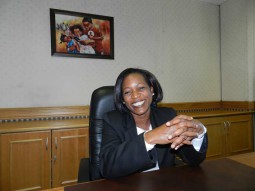 Local mobile operator, Telecel Zimbabwe has just announced the appointment of Mrs Angeline Vere as the operator’s new substantive CEO. This appointment was made effective on the 10th of June this year.

Vere was previously Telecel Zimbabwe’s General Manager, a position she assumed back in 2013. She’s been with Telecel since 2004 and worked as the operator’s Legal Manager and later as its Company Secretary and Legal Director.

She’s got more than 17 years experience having worked at the Broadcasting Authority of Zimbabwe and the old PTC (which is now TelOne). More recently her name was very visible in a temporary leadership role for Telecel in the issues involving its ownership disputes and licence wrangle.

According to Telecel’s announcement, Vere’s appointment is in line with its equal employment opportunity and empowerment policies. The operator is under scrutiny regarding its compliance with local indigenisation, an issue that has played a part in its share ownership wrangle.

As CEO, Vere will have to diffuse the MNO’s ownership situation and come up with a solution for its Mobile Operator Licence shortcomings that saw it face near closure earlier this year. All of this is at the backdrop of Telecel’s loss of subscribers, an insanely competitive telecoms market and tough local business environment which has seen all networks face operational challenges.