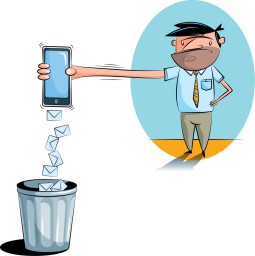 Recently I had a chat with a lawyer about the SMS spam and telemarketing calls that subscribers regularly receive from their network, mostly advertising new products and services. I’m easily annoyed by these SMSes so I had hoped for some sort of insightful legal argument that I could use to build a case against my mobile operator.

Apparently it’s not really spam at all, at least legally it isn’t; a scenario that kind of leaves subscribers at the mercy or goodwill of the operators. Which angle can one use legally to fight this annoying habit?

According to Martin Chijara from the firm Lawman Chimuriwo, there are two main levels at which the subscriber-network relationship is regulated. Firstly, through the Consumer Contracts Act which pertains to the contract that subscribers and operators get into by the purchase and registration of a SIM card.

By my purchase and registration, I have agreed to applicable terms and conditions and operators can easily slip-in a clause in the small print that allows them to send you SMS promos and adverts, whether you choose to or not.

Like scores of other people out there, I haven’t had a chance to really look at the contract of sale that accompanies a SIM card. But as it turns out, even if that explicit clause may not be stated clearly, Operators can still justify their conduct on the basis that it is implied in the contract and they are entitled to do so.

It’s like a bus ticket. Its just as small receipt you get when you pay but nevertheless a real and binding contract for the bus to take one to an agreed destination. It is not clearly stated but by implication the driver has the liberty to take whichever route they see fit.

Secondly there is the more culpable Posts and Telecommunications Act which deals with telecommunications specific matters but really needs updating. It lists some three real offenses that can be referred to in finding recourse.

Firstly, a person is guilty of an offence if one sends by telephone any message that is grossly offensive or is of an indecent, obscene or threatening character. A good example of this law in effect is last week’s story of Machingauta insulting Joseph Chinotimba over WhatsApp. He got fined $100 over it. Well, your network doesn’t really send you offensive material in this manner.

It is also an offence when one sends by telephone any message that he knows to be false for the purpose of causing annoyance, inconvenience or needless anxiety to any other person or makes any telephone call or series or combination of telephone calls without reasonable cause for the same purpose of annoyance.

The question is, does your network really sit down and plan to annoy you with numerous messages and calls? Are the messages sent by operators or telemarketing calls really meant to annoy subscribers, regardless of whether or not they actually do?

What if the message results in a serious inconvenience, for example, a service that offers to send romantic messages daily on a husband’s phone might be misconstrued by the wife to mean that he has actually subscribed to that or some other associated services that may not bode well culturally, if he has a healthy credit but forgets or doesn’t “OPT OUT”.

Nevertheless these messages are indeed a nuisance and the fact that you can’t refuse them from the start is rather ridiculous. It gives the operators an upper hand where they get the option to send you a message and you have to indicate that you want OUT. In other words it’s not spam, until you say it is and there is no running away from it in the near future considering a review of the above Acts is a long way off.