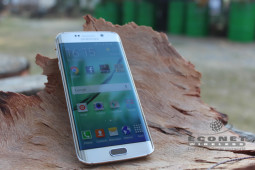 Science and art give very different perspectives to the same thing no matter how hard designers or creators try to blend the two. But that’s never going to stop people from trying. That’s the sort of thinking I get with every new phone these days. My experience with the Samsung Galaxy S6 Edge hasn’t been any different.

We last spoke about the flagship phone from Samsung when we shared Econet’s announcement that it would be retailing in its stores for $1,305. That’s a lot of money for any sort of device, science and art be damned. So what does the device bring to the table that could really make it worth so much? 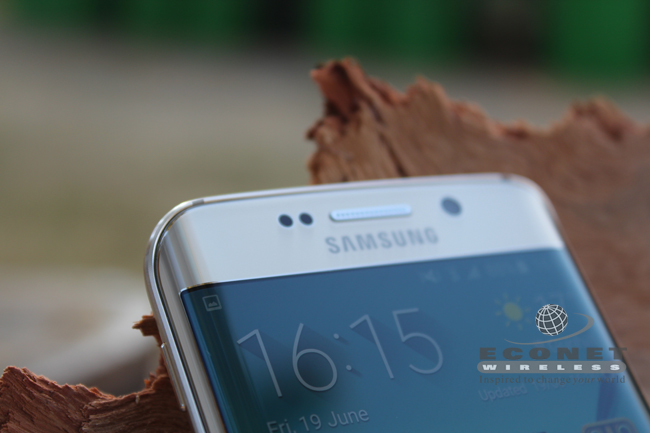 Curves and curves; that’s what they sang about the S6 Edge the first time this phone came out, and that’s what you’ll notice immediately. This striking feature is what has managed to give it the name and a mark of distinction.

Sure, Samsung already showed the world curved screens on the Note Edge, but the wrap around look on both ends of the S6 Edge is a first in its own right and adds oodles of appeal to the device. 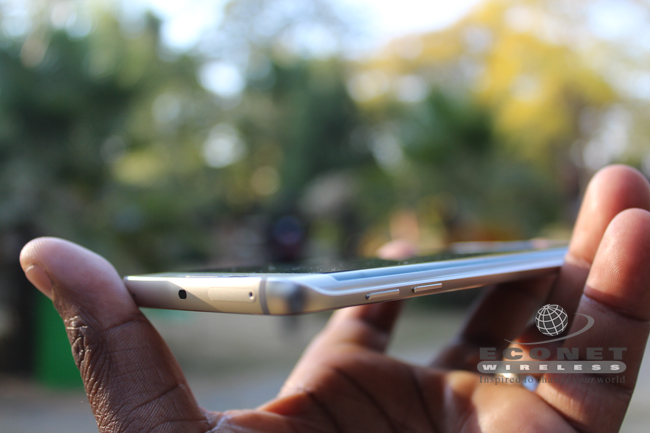 It’s easily the best looking phone that Samsung has presented to date, something that’s not only brought out by the curved edges, but by the metallic body. 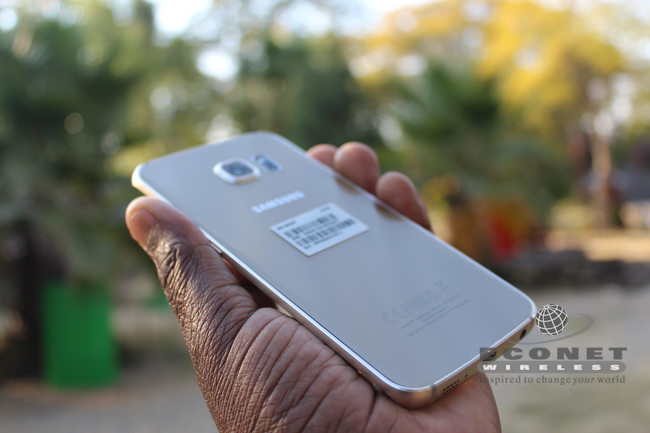 I wasn’t one for that sort of exterior, but I have to admit that the guys from Apple (and everyone who copied afterwards) were on to something when they made that part of their mobile design approach. Samsung has been smart to copy that and leave plastic for lesser folk.

However, it’s not all metal, curves and sex appeal. The same dual curved edge design is something you can’t get out of your head, and there’s always the sense of wanting to handle it gingerly.

That can be tricky when you want to hold it in a crowded place like the vendor-filled streets of Harare. It’s only natural to worry about dropping it and damaging its expensive exterior.

Every time it’s in your palm, you are literally wrapping part of your hand around two ends of the screen which is something you don’t worry about on any other device, even it’s fraternal twin, the Galaxy S6. 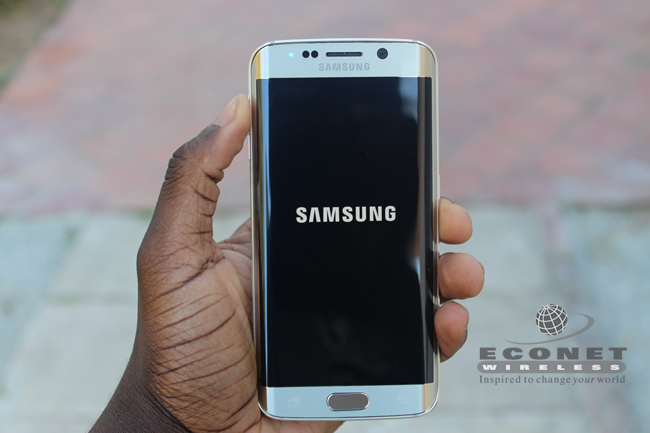 In terms of handle and feel (at 132 g it feels pretty light by the way), I can’t say the metal casing with glass at the back helped either. Any extended use leaves prints on the phone that make you look like some objectophiliac with the constant polishing. 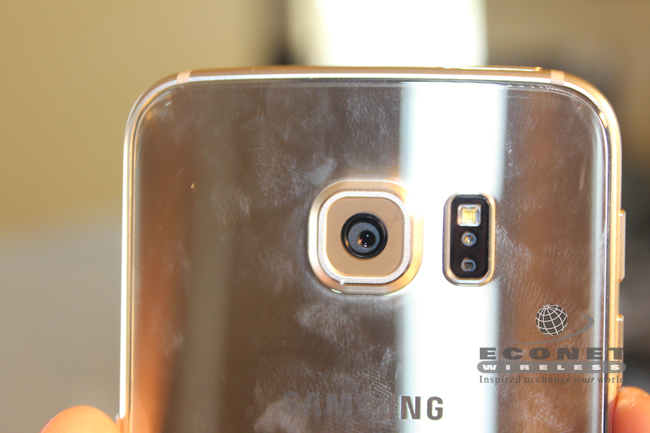 Still on the glass covered rear, the Samsung Galaxy S6 Edge comes with a disappointing protruding rear camera, something that was probably a huge compromise because of its killer camera. Still, it’s something that iPhone 6 and LG G4 fans will hold over Samsung’s head. 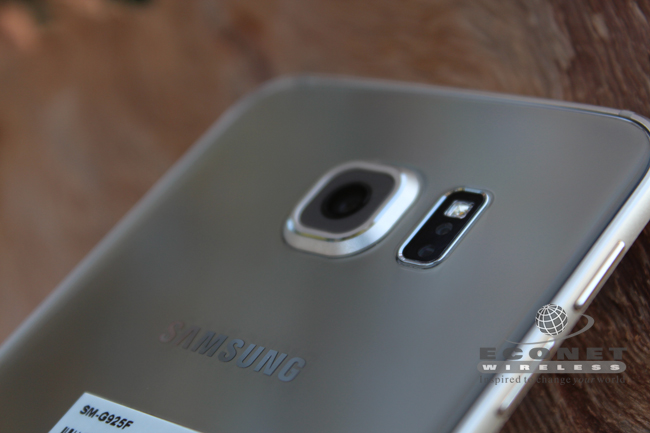 There’s one speaker at the bottom (another ode to Apple?) and the traditional positioning of power and volume buttons on either side. The home screen button is where Samsung has always put it, with an improved fingerprint scan feature as well. 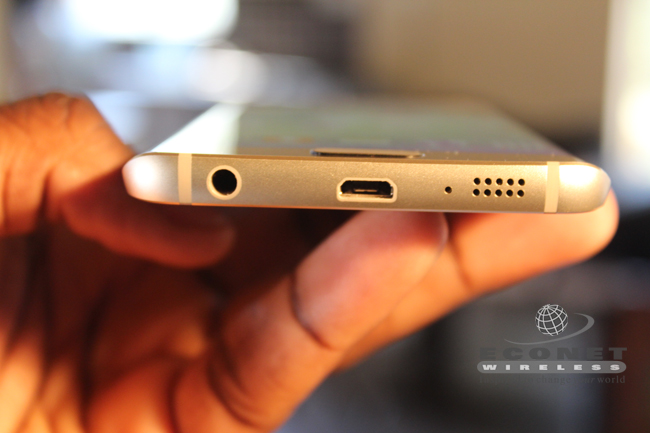 What about battery power and our struggle with ZESA? 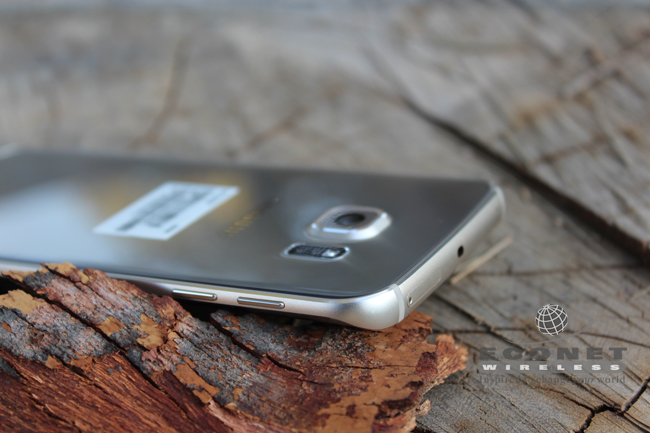 The phone doesn’t have a removal battery, it’s got a non-removal 2600 mAh unit, something that some still consider as a disappointment because of old habits and ZESA workarounds like moving around with a reserve battery.

It’s one of those things that have been done away by most device manufacturers anyways, Samsung was just joining the party.

In terms of power specs this battery is smaller than its predecessor the Galaxy S5, but the S6 Edge comes with wireless charging which is a much faster way of powering up your device. It’s been primed to work on any form of wireless charging (there are 2 main types), and you can still use your wall charger if you don’t have your wireless slab with you. 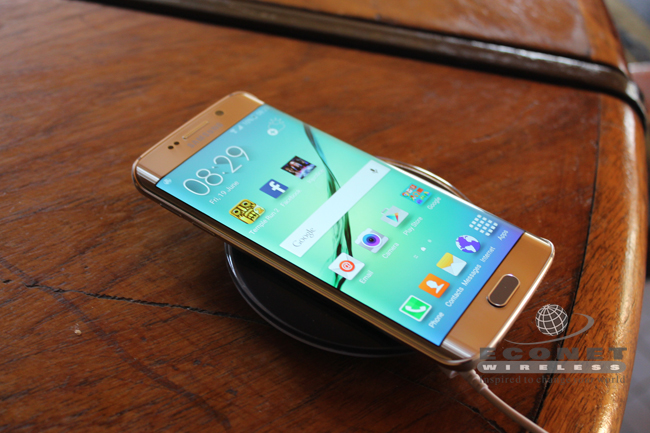 I easily spent a full day on a single charge, using essentials like WiFi, IM, picture snapping here and there and a bit of YouTube, and even had some power to spare (below 50%).

However the same couldn’t be said for days when the phone was used as a default console for games like Temple Run and Injustice Gods Among Us. Such heavy processes are brutal to battery life, and that old power bank you had for your last device will come in handy if that’s your sort of thing. 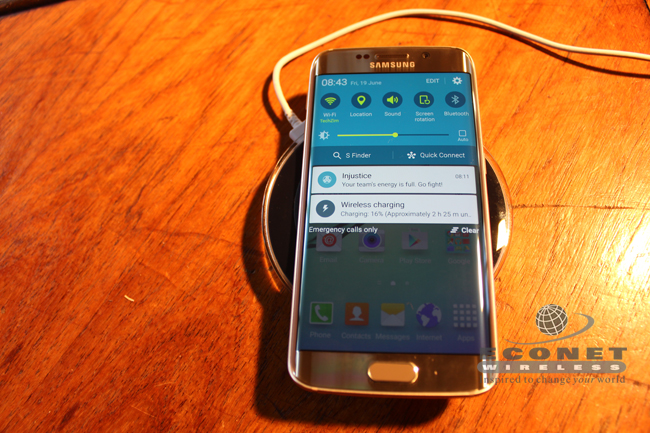 With just basics and power saving initiated, there is a well over 1 and half days that a single charge will get you, however, this wasn’t tried against long conversations and video calling, so the outcome might be a bit different.

She shines on screen and camera 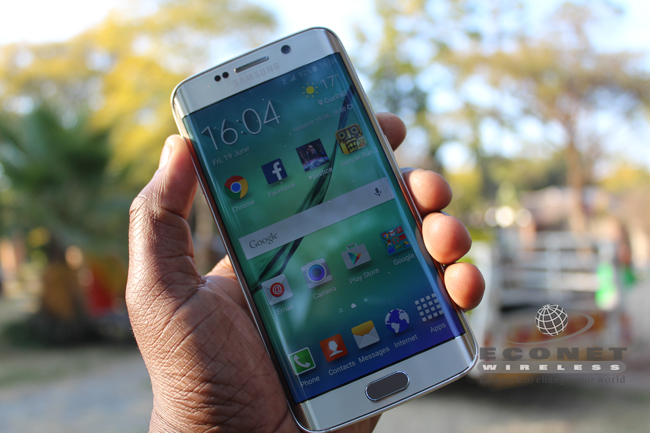 Sure, it’s easy to pour mega-pixels on any device these days, but that’s not what makes a great camera. There are other aspects, like image stabilization, auto-focus, the capturing of detail in low light, the speed of response you get when you want to capture that moment. That’s what every flagship phone is bringing to the table these days. But the right combination is what matters.

Samsung addressed all these aspects, and its easy to pass off as a serious photographer with shots on this device. It carries the same specs as the Galaxy Note 4 so anyone who’s had their hands on that offering will know what Samsung brought to the party here.

Colour, light balance as well as silly little details are captured effortlessly, even on the auto mode.

The video didn’t disappoint either. One cool feature is called virtual shot that gives you a chance to create a 360 degree shot of an object by rotating the camera around it.

When compared to other flagship devices, the competition on image quality these days is pretty close, but the Galaxy Edge is a worthy contender for best camera any day. The same can be said for selfie shots taken from the Edge’s 5 MP front end snapper. 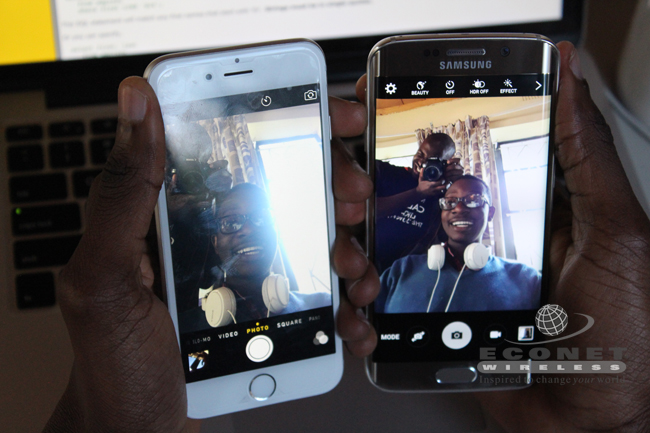 The screen is eerily sharp, and I’m not just fawning on those curves here. Geek numbers put it at 1440 x 2560 pixels, and a 577 ppi (pixel per inch) density means it outpaces anything from other guys making phones. This is a Quad HD display and though some might struggle to understand what that means from all the numbers and talk on specs, the image sharpness will easily convince anyone.

Under the hood and such? 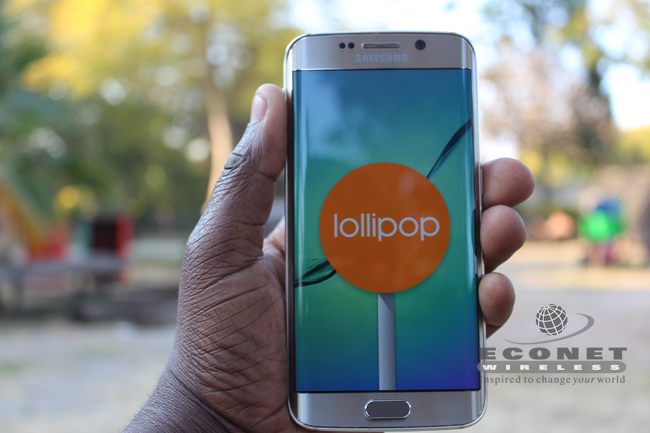 This is an Android 5.0 Lollipop device and Samsung’s TouchWiz has also been made a very visible on this device. The edge comes with Edge Apps, that let you select up to five contacts and colour code them so that you can tell who’s getting a hold of you from a peek on the edge.

All the usual nightmares about stuffed Samsung apps and the need to root your device haunt the Edge, and without expandable memory, I wasn’t impressed by the prospect of space being taken up by apps I don’t use.

Sure, the entry device is a 32 GB machine, you can upgrade by buying the 128 GB version, and the option-for-cloud argument is thrown in there somewhere, but data is still expensive locally. I’m not going to always have internet bundles to back up images to Dropbox or Google. 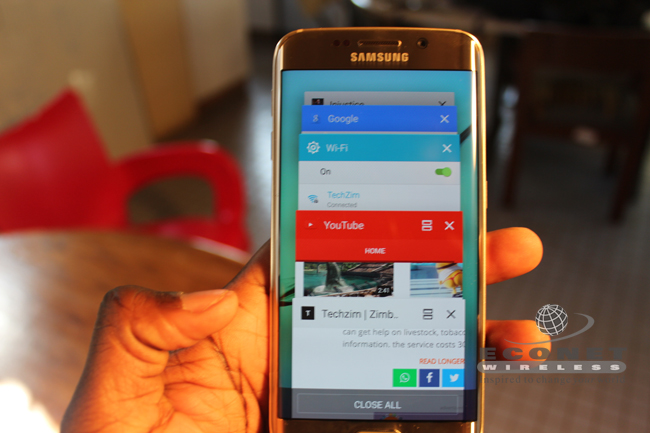 The Exynos Octacore processor adopted by Samsung for the Edge serves it well, and it hardly seemed to struggle, even with a slew of apps and a couple of games lined up. 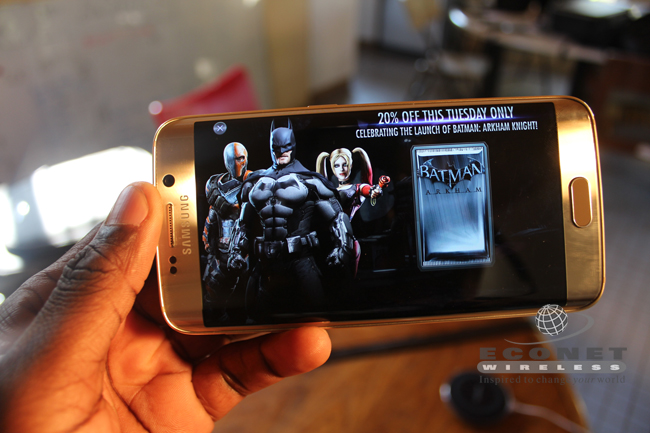 Verdict : An insanely great device with a killer price 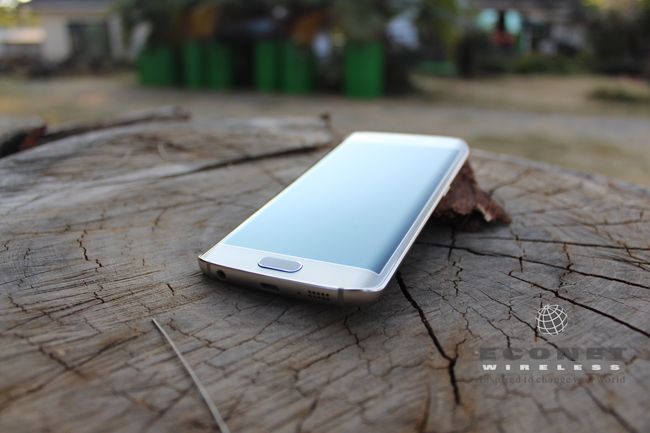 Remember that talk about art and science? Well, this device is the mad scientist of mobile technology who just happens to have a weird flair for artistic elegance.

It’s easily the kickass device of the season. Everything that you’d want in a phone comes to the fore here, and it’s given other manufacturers a good reason to pump more money into R&D.

I was, however disappointed by the limited unexpandable memory aspect and a battery that could have done better.

All of that is however not an issue as much as the crazy value attached to this phone. At $1,305 it’s got an asking price that is not for the faint hearted. But then again, It’s for the well heeled, which is why Econet is selling it under its Premium banner.

If you have the money to splurge, and want to dazzle everyone with a phone that looks as well as it performs, the Galaxy S6 Edge is easily the best phone to pick up, don’t let any other brand, artist or scientist fool you.

18 thoughts on “The Samsung Galaxy S6 Edge: the best in the world, or just expensive art & science?”