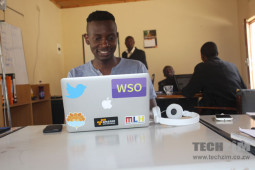 Hour of code is back in town again. Hopefully that statement no longer draws as many blanks stares as it used a while ago. After all, 300 people have been introduced to programming through this initiative.

But in case you missed it, Hour of Code is an event aimed at teaching people from all walks of life the basics of computer programming. Zimbabwe became part of the global phenomenon last year through a patch of events hosted by a bunch of tech enthusiasts called the ICT Generation.

On the 4th of July, Hypercube Harare will be hosting another edition of Hour of Code from 9 am to 11 am. As always the whole thing is free, so if you want to be part of the movement that hopes to take Zimbabwe to the digital age, you can sign up by following this link.

One of the Hour of Code’s biggest strengths as a contributor to tech skills development is that its for anyone and everyone interested. You don’t need to have coding experience to take part in the event. If you are are an experienced programmer, you can help teach those who have little or no coding experience.

Why is this sort of thing a big deal though?

A couple of years ago coding was not mainstream. It was associated with the nerdy people. The stereotypical image of a programmer painted by popular culture was of a bespectacled, White/Asian male who spent countless hours in front of a computer. But that’s far from what coding actually is.

A glance at the roll-out of Computer Science in High Schools in Zimbabwe as a yardstick on tech introduction in the learning curriculum is disappointing. Forget the ambitious (and shrouded-in-mystery) School Computerisation  Program, the fact is that skills in computers, let alone coding, are not taught in the majority of schools.

Our focus in local education is being revised to include foreign languages including Swahili and Chinese. That has its merits, but the education board is mum on addressing the issue of expanding the number of schools offering computers and technology.

It’s a well known fact that Zimbabwe has a high literacy rate. Like most countries we have addressed the issues of traditional literacy. But the challenges countries face have changed, so has the definition of literacy.

Coding is now the new literacy and Zimbabwe is in need of educational support in line with this. Maybe it’s time we stop focusing on Swahili, Chinese and Psychomotor skills and talk about Zimbabwe’s digital literacy.

If you plan on spending your time preparing for Swahili or Chinese curriculum, good luck ! There is no love lost from me. But if you want to cultivate time and effort in the information and digital economy, let’s meet up at the Hour of Code this Saturday.

8 thoughts on “Hour Of Code Zim event scheduled for the 4th of July; why should we care?”