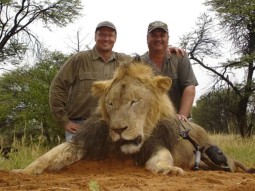 Walter Palmer (left) and one the Lions he shot in “Africa”

Most Zimbabweans have never even heard of the name Michael Swango. When I asked people from my own neighbourhood and my friends whether they knew who he was, the questions were met with the universal response: “Swango who?”

In contrast, a lot of people seem to all of a sudden know who Walter Palmer is thanks to the internet. People the world over from Zimbabwe to Hollywood celebrities  and now even real life knights have been hurling the choicest abuse that people can muster at Palmer for the past day and a half ever since the Telegraph outed him as the man who killed Cecil the Lion.

RIP #CecilTheLion
I'm struggling to imagine anything more beautiful than this pic.twitter.com/lile3Kb2dk

The facts are not in dispute: Mr Palmer, the “scum bag” as he is now known, is a middle-aged rich dentist somewhere from  the state of Minnesota ( “land of the 10 000 lakes”) in the USA.

He came to Zimbabwe sometime near the end of June and on the first day of this month he and his colleagues went out at night, illegally lured a lion from the Hwange National Park using a dead animal tied to their vehicle.

This Mr Palmer then, at the instruction of his guide, shot the lion with a crossbow, the wounded animal fled and they tracked it for 40 hours before Mr Palmer finished it off with a gun. They then hacked the head off, skinned it and tried to destroy its GPS tracker and then Mr Palmer just left the country or did he? No one seems to know where he is.

Unbeknown to these men was the fact that they had just killed Zimbabwe’s most famous lion, Cecil, who was the star attraction at Hwange National Park. He had been fitted with a GPS tracker since 2002, a tracker the “hunters” failed to destroy. The animal was as tame as a wild lion will ever be. Days later people found the headless skinless lion and the partially destroyed tracker and the story broke.

A picture is worth a thousand words and while news of a bomb blast killing people in some remote village in Afghanistan evokes feeling of sadness, pictures of a gentle lion “which never bothered anyone” kindled rage. The hashtag #CecilTheLion has been used tens of thousands of times on Twitter and when Walter Palmer confessed to be the lion killer so did his name #walterpalmer. Twitter users started doxxing him.

With some publishing not just his name but his private information including his home and work addresses. His dentist practice’s Facebook page was besieged by angry netizens looking for a way to vent their anger. Thousands of comments and death threats appeared. The page was quickly taken down. His dentist practice’s website was also targeted and like with the Facebook the site is now also offline.

The exact whereabouts of Mr Palmer are unknown at the moment as he has now hidden under the skirts of a publicity firm which put out a statement saying that Mr Palmer “regretted” killing the lion which he did not know was famous until the end of the hunt and he thought the “hunt” was legal.

Questions remain as to why Mr Palmer and his colleagues chose not to report the kill when they found the GPS tracker or why they allegedly tried to destroy it or why he left so quickly without saying anything. His dentist practice has also been closed as people, using the power of social media, organised and staged a protest.

People were not going to be outdone by the closing of the practice. They have now turned to his Yelp page where people have inundated his practice with “One-star” reviews. Witty satirical fictional reviews have been made to accompany these bogus ratings.

Weird visit. Some guy lured me into the dental chair by waving beef jerky at me,” one Yelp reviewer wrote. “Once I sat down, Dr. Palmer viciously attacked my one cavity, but was unable to hit it with the drill. Profusely bleeding from my mouth, I fled the building and wandered the surrounding woods for a day and a half. Thankfully, I didn’t bleed out. My family would’ve been killed and eaten by my neighbors. Two stars.

Yelp keeps deleting these reviews, but people keep adding them. It is doubtful, despite a recent press release by Mr Palmer’s firm to his patients, that Dentist Palmer will be returning to work as most of his neighbours also took to the internet to express their shock and disgust. He’s taken an infamy akin to Ariel Castro’s to his neighbours.

Petitions have also cropped up with one on the White House website (I cannot believe they use Drupal what’s wrong with WordPress?) calling for his extradition to Zimbabwe to face justice. It has already surpassed the 100,000 signatures the creator of the petition was looking for.

As people started to know who Palmer was and thanks to the fact that people have resisted the stupid French and Spanish move to allow people the right to be forgotten, it eventually emerged that Mr Palmer is indeed a known felon who committed a crime similar to one he is now being accused of.

On September 1, 2006, internet vigilantes pointed out, Mr. Palmer killed a bear in Wisconsin outside the permitted zone and lied about it. He and the people in his group then agreed to lie to the authorities that they had acted within the law. They were later convicted and he was fined $3 000 and given one-year probation. The details of this story, when compared to the current one, paint the picture of serial hunting law breaker who will not hesitate to lie.

He also had, in 2008, an out of court settlement for a sexual harassment suit brought by a former receptionist prompting some to skewer him on social media as a man who uses his money to get around the law as some mocked his $1 million dollar home.

Mr. Palmer’s accomplices, the man he paid to do the hunt, were granted bail yesterday. No one is tweeting about them as they face possible 15-year jail terms.

I cannot still believe people do not know who Michael Swango is! The lesson though is that while Swango managed to evade the authorities for so long and while he could easily escape his misdeeds, first by hopping from state to state, then country to country and be able to start over, these days the internet makes it impossible to get away with outrageous acts.

One minute Charity Charamba is outing you to a small press conference that no one cares about in Harare, the next minute your name is in the Telegraph, a few minutes later Facebook, Twitter and the whole internet is raging about you as your name is Tweeted, doxxed, shared and Googled into infamy.

In less than an hour, protesters are at your workplace and home throwing stuffed animals at your house. Your neighbours are appearing on CNN telling everyone who will listen how they cannot believe what you have done. How they are shocked and disgusted by what you have done and distancing themselves from you. Next time you know you are radioactive. People will not be made to touch you even if they were wearing an Ebola suit.

Oh, by the way, Michael Swango was an American serial Killer who murdered 5 Zimbabwean patients and attempted to murder 2 more almost two decades ago. There is still a warrant out for his arrest as he currently sits in one of those American jails a la “Orange Is the New Black” eating better food than the surviving family members of his victims will ever have. He did what he did before Twitter and Facebook so no one cares.

P.S Some of my friends and those on the internet have mocked and pointed out that Mr Palmer is not really a hunter, despite his claims, basically he sits in a car as people lure the animal with meat and shoots it from the comfort of his vehicle. Some have called for trophy hunters to do it the Fredrick Scout way and I agree.

People I talked to were a bit confused by the whole story.

Wait, if he already had meat and a dead animal, why was he hunting?

My 4-year-old nephew asked me that. I have been wondering about that myself.

8 thoughts on “How the internet eviscerated Walter Palmer”