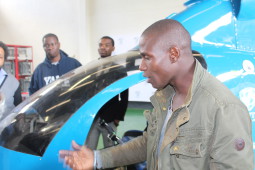 One of Maxwell Sangulani’s claims is advancing the proven ability to generate electricity from radio frequency. By exposing undisclosed material (trade secreted) to radio frequencies, the Greener generator is able to harness the energy produced into usable electricity.

His claim is that he has advanced beyond the law of conservation of energy as commonly understood as equal transfer of energy from one form to another saying that this particular “discovery” shows the use of simple gel batteries in series of 220 volts producing a much higher output in electricity (500,000 Watts). We are not sure how this assertion can be dispelled and we hope at some forum scientist will put the claims to test.

Maxwell did not invent the car. He imported the shell and went through the process, with artisans, of manufacturing the chassis and mounting the “engine”. The same power generation in the Greener generator is the one that is deployed in their Electric Vehicle.

The car does not require recharging from an electricity source. It requires just 5 regular gel batteries to start generating enough capacity to power the car and recharge the batteries (perpetual vehicle). Scientifically, perpetual motion says that once an object starts moving unless hindered by an external force, it will continue to move forever.

The pendulum in high school science is a close example. Sangulani, however, argues that perpetual motion devices use more energy than the output and that he has done the opposite; less energy for more output. For this reason (defying the known laws), according to him, his technology has not been able to file a patent worldwide.

With the helicopter however Maxwell claims that they have manufactured most of the craft locally after importing the carbon fibre cloth. He concedes that most of the electronic components are imported. Referring to how it looks similar to the Alibaba pictures, he says that they did not need to recreate the body but just used the common models in the same way you normally can’t tell the difference between a Boeing and Airbus (Boeing 777-8X and Airbus A350-900).

Several sections of the aircraft are visibly unpolished and Saith claims that other than the carbon fibre, most of the metallic parts are made with material from Aluminium Works and BSI Steel, Mica hardware and bolts from TNT Bolts. The transmission and mast attaching the engine to the rotor blades are powered by a go cart diff. The major innovation for Saith is the Fly-by-wire ability which they designed. FBW systems replace manual analogue flight control with electronic equipment making the aircraft lighter.

Maxwell claims the drone can be 100% autonomous after receiving instructions. According to him most drones available come with normal flight controllers but only a few have the autopilot ability. This particular autopilot software was imported from Canada. The company’s innovation is the ability to synchronise all the various components (motors, sensors, radar etc) electronically so that the drone can fly independently instructing and recalibrating itself depending on the terrain and weather conditions. It has a fail-safe mode of simply returning to base if systems fail.

Maxwell developed a similar technology that was to be deployed at Brodacom called intelligent mesh network. It is a combination of self-organizing multiplexing base stations that can act as bridges or many to one or one to many transmitters and receivers.

The mesh uses multiple frequencies in the same LAN and intelligently between any points searches for the frequency that is free to send data and receive data different from the next frequency between the next points and so forth. The base station uses mostly Atheros processors. The resulting effect is an intelligent mesh solution that can bring huge carrying capacity and radius useful in Wi-Fi connectivity or for long distance one-to-one VPN connections.

It may be folly to dismiss Saith Technologies’ claims without stressing them and giving them a chance to prove themselves as we stand to lose ingenuity in a flurry of emotions and egos.  At the same time, it is also prudent to take the claims with a pinch of salt. Typical of any new developments in science, there is untold resistance some of it unintelligent. Besides experts, time usually has a way of proving or refuting such claims eventually.

112 thoughts on “Saith Technologies : What is the real innovation / invention?”