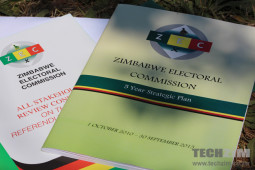 The Zimbabwe Electoral Commission has indicated that they are pursuing Biometric technology as a tool to improve electoral efficiency. Biometric voting is a technology that is in use in the more developed countries. It uses fingerprint, optical and facial features recognition to record and profile an eligible voter. It is very difficult, if not impossible for one to cheat these systems in terms of identification.

Though not in a position to disclose who, ZEC’s Director of Public relations, Mr Justin Manyau at their exhibition stand at the Harare Agricultural Show, said that at least five technology providers have made presentations to the organization in terms of what they can offer and their business proposal.

Locally the companies that deal with biometric security systems include Fuzzy electronics but they would need a huge scaling to be able to handle the likes of such a project. Most likely the project would be awarded to a foreign company as is common with major projects especially with the Sino-Zim technology relationships.

If adopted the process will require at least 60 million dollars as it involves a complete overhaul of the voters roll and recreating it on the biometric platform. Mr Manyau indicated that ZEC would have been happy for such a system to be available by the 2018 elections, but he, however pointed out that the broader economy is struggling and Treasury is currently facing challenges in sustaining  the main budget.  Considering the state of the economics in Zimbabwe, it does not look like the idea of biometric voting will be a reality any time soon.