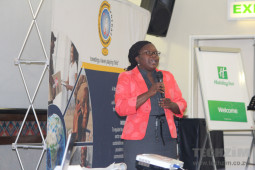 Tsitsi Mariwo from POTRAZ, leading the discussion on Infrastructure Sharing

Econet and Liquid Telecom have pulled out of the negotiations and policy consultations of telecoms network Infrastructure Sharing at the Second National Stakeholders Conference convened by telecoms regulator POTRAZ.

The two companies will not be party to finalisation of the discussions. This is despite the unveiled order given by the ICT Minister for the conclusion of the debate which began as way back as 2014.

Having been very vocal about its thoughts on the implications of infrastructure sharing, and because of its huge investment in telecoms infrastructure, Econet’s absence was rather conspicuous following its boycott of today’s meeting. It is not yet clear why, at the last minute, both Econet and Liquid have pulled out of a process that they have been part of from the very start.

The assumption, however, is that Econet will have its first mover and capital advantage eroded by sharing infrastructure. However this may not be the bone or its argument.

Asked on the implications of such a move by these parties, the POTRAZ Acting Director of Legal Services, Mrs Tsitsi Mariwo says that the process will continue to formulate both policy and regulations up to a time when they become enforceable.

She also commented that according to the legal team that worked with all participants, there are no legal impediments restricting the process from continuing and could not shed light on the basis upon which Econet and Liquid may premise a legal challenge in the courts.

The recommendations for infrastructure sharing, in fact, were already provided for by the Telecommunications Act, as old as it is. Section II of the Statutory Instrument 28 of 2001 gives the authority (POTRAZ) some power to direct and compel licensees on issues of national interest.

In Section 6 of the new infrastructure framework, which will be shared on the POTRAZ website, the regulations go further to also give POTRAZ explicit powers to compulsorily compel players with penalties,  and also in Section 8, for failures where such parties cannot justify refusal to share infrastructure. We are yet to get a comment from Econet and Liquid on their actions today.

This a developing story and we will share any updates as the issue progresses.