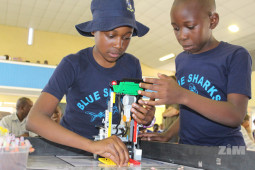 Organized by Kenyon Stamps and TEST as a way through which children can start to learn electronics and robotics, this year event ran under the theme “Agriculture in the 21st Century”.

The theme tried to bring relevance to robotics and electronics as a platform through which real life solutions can be developed.  Perhaps it was also a response to the continued low turnout at the First Lego and RoboFEST challenges especially from non-group A schools and colleges.

This edition also introduced the Minecraft Challenge which seeks to introduce learning in children via the use of computer games. Minecraft, which was purchased by Microsoft from game maker Mojang for $2.5 billion last year, is a game that allows users to show creativity by using blocks to built a virtual world. Minecraft enthusiasts have set up a local “Zimcraft” server; zimcraft.tk through which members can compete online.

In addition to the robotic and the Minecraft challenges, schools also competed in exhibiting various science projects under the same theme. The competition was graced by the Minister of Education, Arts, Sports and Culture, Lazarus Dokora.

Such events are not just a posh get together of “Group A” schools as is the impression somehow. They are critical in providing minors with a platform through which they can sharpen psychometric skills, boost self-confidence and teach teamwork and corroboration in solving problems.