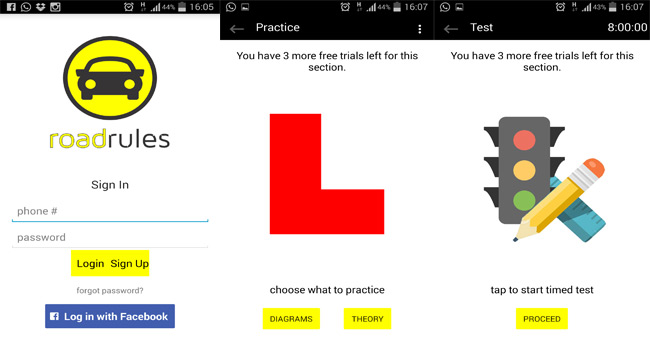 Like every other previous incarnation held before it, this year’s DEMO Africa Conference was yet another opportunity for a select group of African tech startups to showcase their solutions to potential investors and business partners, while establishing some form of regional relevance in the process.

Zimbabwe was set to be represented by two startups and one of those startups, Road Rules, failed to attend DEMO Africa. The team ended up focusing on refining their product – a mobile app proving learning content for the provisional drivers’ licence test – and they have now launched it on Google Play.

This is the first time that the app has been made available to the general public. The app previously had a demo version which was first developed on the Ampion Bus last year and demoed at Apps World in Germany in April this year, and at Innovation Baraza.

What does it offer?

The first impressions of the Road Rules App are that it is a solution that has an easy to use interface, with a clear display of content. As is expected of apps in this field, the app is interactive, specifically for questions taken under the practice section.

The diagrams are clear, which is something that other content providers, both online and offline, attempting to sell this sort of solution tend to overlook. It also provides a fairly comprehensive run through the basics of a learners licence application. 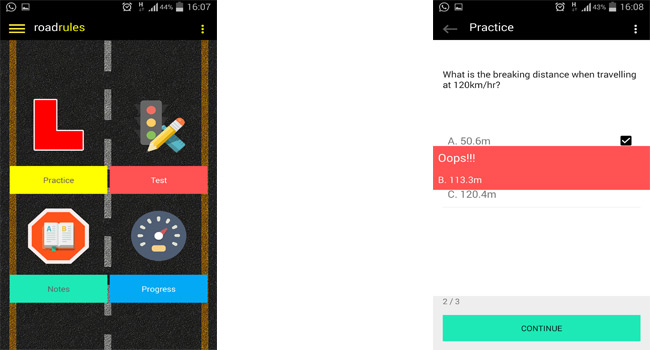 There seems to be a fair amount of content which is available under 3 different tabs – namely Practice, Test and Notes. According to Road Rules team, this is content created through collaboration with a local driving school. The app also scores points for providing a progress check, something that ought to help users assess their readiness for the $20 jaunt at the VID.

One frustrating bit is that tests and practice have a fixed length, something which tips its hat to the 2 question format of the VID test. However, in my opinion, having bite-sized practice tests wouldn’t have been so bad.

All this doesn’t come for free, though. Sure, you can download the app for free from Google Play, and it will let you get a feel of its core functionality but only as a trial version.

To get the complete Road Rules App, you will have to activate it using a code that you can get by paying $2 through EcoCash and Telecash. That seems like a fair price, considering that it is in line with you’d pay for street vendor paper based material for the same test.

Part of my frustration with the app also came to the fore here. Besides limiting payment to mobile money, there is the fact that the process hasn’t been made as seamless as it should be in 2015. Selection of a payment option and making the actual payment could be prompted by an automated generation of the code.

For now, you have to follow up with the Road Rules team. Fortunately, they’ve done a lot to be as accessible as possible, giving a feedback channel for the app as well.

Speaking to Tawanda Chikosi, the founder and CEO of Road Rules, he explained how monetising the app was prompted by the need to have resources for the constant updating and renewal of content. He pointed out that Road Rules wasn’t just selling answers to the Learners’ Licence Test, but offering a learning tool which focused more on explanatory content that could never be static.

The Road Rules App offers an alternative source of revision material for the learners licence app. In a lot of ways, this problem has been touched at by other app alternatives so Road Rules will have to amplify the delivery of their value proposition to stay ahead of the curve.

This means creating a better delivery of content, competing on a fair price and offering delivering material that is worth someone’s time. Part of what they have displayed with this app suggests that they have figured some of these things out already, but as with all things to do with startups, its the market response that will tell the better story.

You can download this app by following this link. What are your thoughts on this solution?