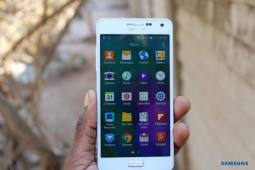 Samsung has literally done everything possible at this stage to make sure there’s a device for everyone in this world. That has been tricky to translate into reality when it comes to smartphones, something that hasn’t stopped Samsung, and right now there doesn’t seem to be any other brand, besides Samsung that has come close to achieving this goal.

The initial impressions created by this bookish description were what we wanted to establish or disprove when we got our hands on it. It turns out, there’s a bit of truth at both ends of that statement’s spectrum.

Phones are best dressed in metal – That’s the rule that’s being applied to a lot of high-end mobile devices, and Samsung has started implementing this already with recent versions of its devices like the Galaxy S range and similarly, with the basic frame of the Galaxy A5. 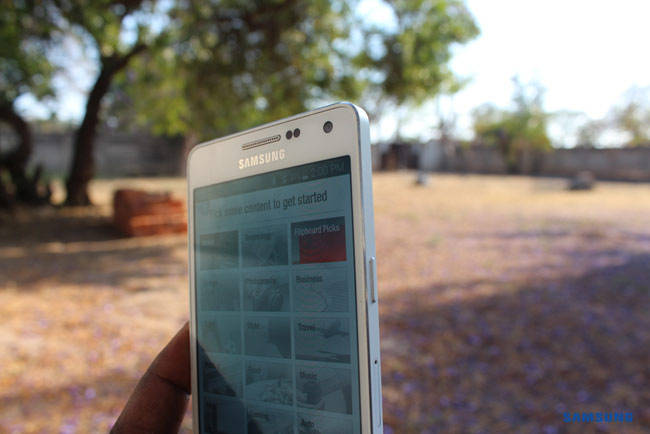 Which is why the chamfered metal sides are the first thing you’ll notice about the phone. There is, however, a non-removable plastic posterior, which has been molded to blend beautifully with the rest of the phone’s metallic touches.

It’s the sort of gentle reminder that this is, after all, a mid-range phone, which battles to shake off that tag with aspects like this convincing unicast body and nano-SIM compatibility.

The Galaxy A5 comes in a slim 6.7 mm frame, with a corresponding 123 grams in weight (that’s 22 grams lighter than its big brother the Galaxy S5). Besides the SIM slot, the side elevation also displays a micro SD card slot, which will accommodate “up to” 64 GB that you can pile on to its standard 16 GB memory bank.

The hallmark Samsung features like the power button on the right, volume controls on the left and the all too familiar home button anchored at its front constitute the rest of the exterior.

The device posterior houses a protruding camera which lies smack in the middle of the phone’s single speaker and LED flash, while the USB port and the 3.5 mm sound jack both sit firmly at the bottom of the device.

This device hardly looks and feels like a mid-range phone, thanks to the solid grip formed by the sleek design and its snug feel inside your palm, and all the design essentials that were clearly taken into consideration when sharpening its looks.

Images are very important for any serious discussion on phones, and the Galaxy A5 has been true to their cause. It comes with a 13 MP rear camera and 5 MP snapper for the front.

While it is outpaced by the bigger Galaxy S5 and every other high end/flagship device contenders, the A5’s rear camera conjures up memories of the Galaxy S4 and is similar to this device in a lot of respects thanks to aspects such as geo-tagging, face detection and auto-focus, all of which have become mainstream for Samsung and other respectable phone brands.

However, it does shine with its secondary, front camera, which is a 5 MP vanity tool that carries a list of options for selfie customisation like the wide selfie and makeup-model-favourite, beauty face feature.

It is great for photography in decent light, and can give an awesome capture of image detail.  In low light, however, this wasn’t always carried out as gloriously, though a decent show was put up.

Images taken with the Samsung Galaxy A5

The screen is a 5 inch (hence A5) super AMOLED display, with a 720 x 1280 pixels resolution and an estimated 294 ppi pixel density.  This is tucked somewhere below flagship device standard and above your average mid-range phone screen performance. This means that watching YouTube videos or poring through social media picture galleries is fairly pleasant to the eye. Corning Gorilla Glass 4 acts as the standard veneer of protection for the sharp and accurate display. 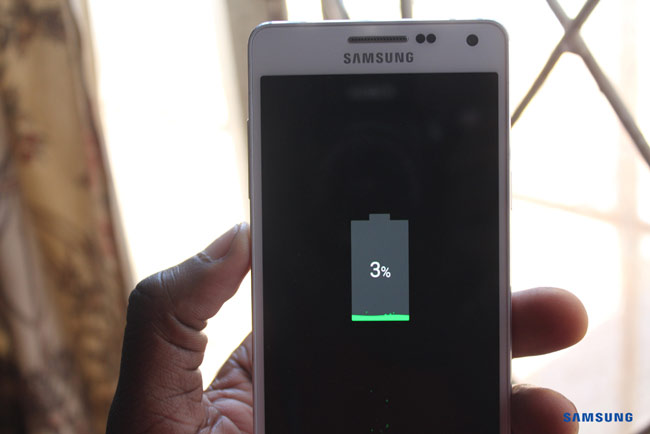 A 2300mAh battery powers the Galaxy A5, which, according to two full-day tests on power, translated to a full day’s service using ordinary essentials like instant messaging, indiscriminate photo shoots, social media checks like Facebook, the odd YouTube video and brief game sessions during a kombi commute to and from work.

In effect, the phone has to be charged at the end of each day (or rather, at least once every day, depending on your load shedding schedule), though conservative usage and the phone’s power saving mode can let you get away with powering up the following morning.

The use of a non-removal battery also made this all the more challenging, so backups like the all too common power banks are what you will have to consider for the purchase kit for the phone.

This device comes with a Quad core 1.2 GHz processor, and a Qualcomm Snapdragon 410 chipset. These are the strong representation of the Galaxy A5’s true market segment, having been designed to go head to head with other mid range phones.

The compromise also dovetails with the 2300mAh battery and explains the ceilings placed on aspects such as screen performance and image rendering. However, these specs are ideal for the Galaxy A5, serving it well and ensuring the delivery of a good performance in every category that it competes in. 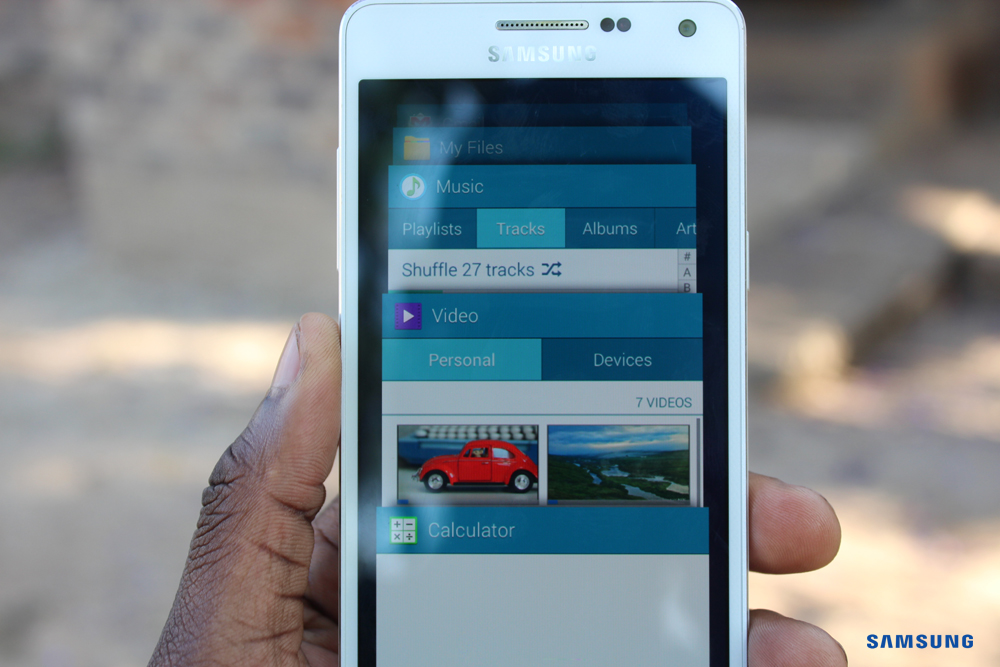 2GB of RAM proved sufficient for day to day tasks on the phone, and it crossed the threshold of performance when tested on the handling of multiple tasks like games, video, music and active IM interaction.

One huge plus for the phone is the fact that its is LTE ready, which makes it the ideal way to tap into the new Zimbabwean run on 4G being enacted by our mobile operators, even though this network standard has a tax on your battery power. 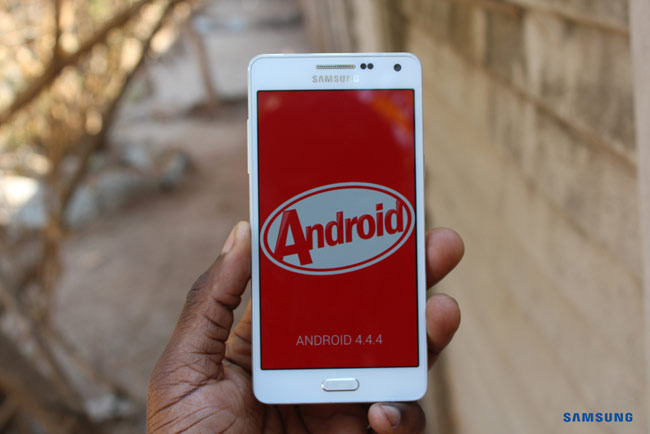 Android 4.4.4 KitKat is the OS version of the day here, once again proving how Samsung seems to be slow to activate an upgrade to the more recent Android Lollipop which is now being usurped by Android Marshmallow. In any case, most users won’t mind really. KitKat accommodates all the popular apps that easily come to mind.

So what’s the damage to your pocket?

Depending on your retailer of choice and how far you want to look, a brand new Samsung Galaxy A5 with 12 months warranty is retailing for anywhere between $380 and a steep $519. You can also pick it up on a $40 a month, 24-month contract, subject to the terms of the provider.

The price ranges seem fair for a mid-range device, especially one that will ooze high-end appeal and put a sturdy Samsung device in you palm. 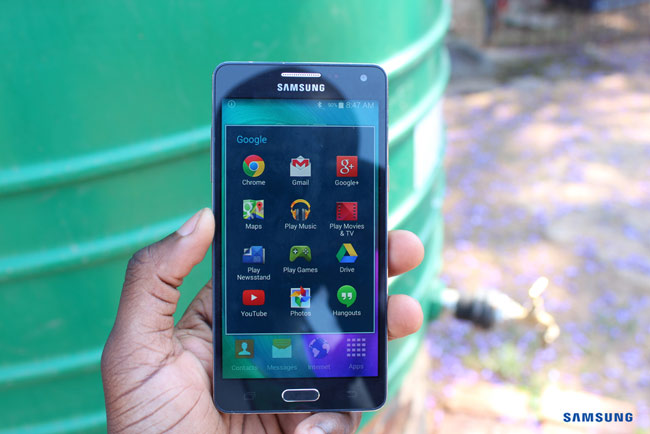 The Galaxy A5 is easily the best pick for someone looking for high-end impressions on a mid-range budget. As long as you maintain realistic expectations about what you have bought, you will be impressed by the phone.

Even though it looks, feels and occasionally performs like a flagship device, its only drawbacks stem from how it maintains its true identity as a mid-range phone, with extended performance and specs that fit firmly in that category.

In the bigger scheme of all things mobile, it looks and feels like one of the better investments for anyone on a budget trying to upgrade into a modern device which handles everything you need for a smartphone built for 2015/2016.