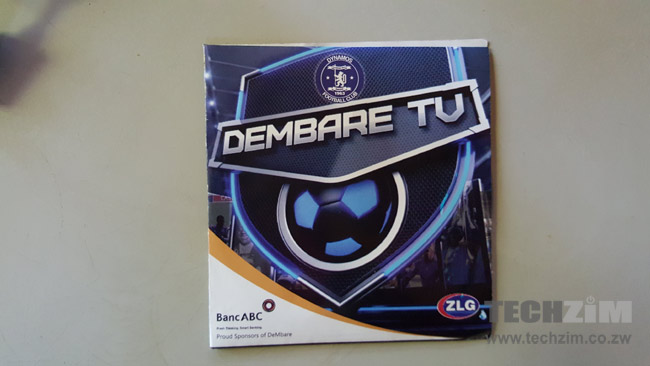 When it comes to Zimbabwean football, Dynamos and CAPS United have, since their respective formations, represented the game’s insane popularity.

These two clubs enjoyed strong support and, combined, they have the lion’s share of soccer fans in the country. This creates a strong brand presence for both clubs and also explains why the special place they hold in fans’ hearts is now being monetised in one of the more common ways known to football – through visual content.

It was recently reported that CAPS United unveiled an official club DVD magazine called The Makepekepe Show which will be distributed monthly through a DVD priced at $1.

The DVD comes with a compilation of interviews, match highlights and player profiles and CAPS United is eyeing the revenue that comes with selling the DVDs as well as corporate advertising. Other plans involve screening the show on ZTV and SuperSport which owns the TV rights to local top flight football.

All this follows the same path taken by Dynamos when it unveiled its own Dembare TV Magazine show and DVD.

It’s game time in the digital world of sports

From the perspective of a local fan, these two clubs are moving in the right direction by identifying opportunities to engage with their fans and grow their brands beyond the limited strategies that have characterised Zimbabwean football. It warrants some form of merit, especially with the dynamics that now surround sports and branding, of which the latter is a key driver behind the revenue potential in this field.

Looking closely at trends in digital distribution of content, there isn’t a better time than now to explore even more diverse strategies and branding opportunities, especially for something as religious as soccer.

Soccer fans have always looked for platforms and channels to express the various emotions that are attached with any game and their respective teams. Now, more than ever, this means using accessible technologies that allow that.

Social media, interactive content, mobile apps, material that can be engaged with well after the final whistle, broad communication channels like SMS that create some level of mass engagement, and even gamified campaigns all provide ways to do this, something which wasn’t possible decades ago.

The way the game is enjoyed has changed. Soccer fans don’t just watch the game or listen to it, followed by heated discussions in the local tavern or in a kombi. Thanks to digital platforms, there is the opportunity for engagement with a wider audience and even with various contributors to the football clubs.

Looking at Dynamos, CAPS United and every other team that is set to follow this model (for the first time my money is on Highlanders), the use of the DVD as a channel for distributing content is smart because it takes into consideration the content consumption patterns that are easy to observe in Zimbabwe’s urban areas.

The disc is, by most anecdotal evidence, the most prolific stream used for sharing visual material by both legal and illegal holders of content. It’s a thoughtful strategy, despite how the DVD is prone to the cancer of piracy.

Channels that include live streaming and VOD services are still in their growth phases and besides the low internet penetration in terms of home internet access (versus the fan totals and demographics) they haven’t been priced for the entire market as yet. the internet is still expensive – but that’s a gripe for another day.

However, in all this market awareness from Dembare and Makepekepe, it seems like just a small fraction of what can be really done to expand local football brands.

In a world where the main gateway to information lies in people’s hands in the form of a phone, local premier league teams, and the service providers that can create solutions for them, haven’t really done all they can to tap into the a huge potential market.

This is hardly an expectation to have 360-degree mobile and digital marketing campaigns like the ones being mounted by sporting giants like Manchester United, the New York Yankees, Bayern Munich or Kaizer Chiefs. Rather, it’s about pointing some relevant truths that local clubs should identify as possible ideas which can be kicked around (excuse the pun) for future revenue streams.

Where’s the rest of this opportunity?

Depending on how local soccer and the brands that are part of it or support it handle it, there are some ideas that can be exploited, provided that their value proposition is made clear for the fans, the clubs and the brands themselves.

There are opportunities to use Value Added Services as channels for club and league promotion in a manner that enhances the branding appeal for current and potential sponsors. SMS, for example, can be exploited for interaction with the fans, and as effective lanes for promotions related to a club.

Just across the Limpopo, Premier League teams like Kaizer Chiefs and Orlando Pirates have activated some additional revenue streams, especially towards derby encounters by using such solutions. Local developers could, for example, identify similar opportunities and figure out how to package them. This would at least be more than the SMS campaign carried out by NetOne for its own Cup or the Chibuku Super Cup.

Social media also presents opportunities for fan engagement. So far, the largest local soccer brand, Dynamos, has had its clearest voice on social media through the Facebook page/news site, Dembare Dotcoms. Other premier league teams also have the customary facebook footprint, but much isn’t done by all teams to engage the fans and create conversations that can also boost brand value.

It shouldn’t end on Facebook, though. Twitter can also be a gauge of match anticipation, fans thought and sentiment on everything around a club from its players to the latest rumours on who is set to be the next manager. It’s social media strategy, so a lot of thought needs to be put into this, by people who have the right passion and understanding of how best to get the most out of the hundreds of thousands of fans that follow pages.

There is also the growing opportunity of mobile apps. Local teams haven’t caught on to the opportunity that is now being explored by premier league sides in countries like Kenya and South Africa where teams not only have up to date websites but also put a lot of attention into mobile apps that deliver as much of what a fan needs as is possible.

Fans would love to follow the latest in team news on signings, player profiles and league standings through a dedicated app that could also have extras like discounts on tickets and club merchandise.  The best representation of that so far has been a local league app, but there are opportunities at a club level.

This is hardly all of what can be done by local soccer teams to tap into digital opportunities. There is a lot more to be tried, so what else do you see as a working idea?