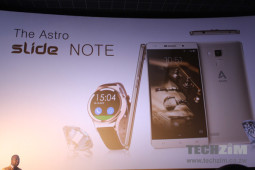 The event acted not only as an opportunity to unveil its new offering, but a platform for Astro to revel in its recent achievement as a continentally recognised enterprise.

According to Munyaradzi Gwatidzo, the founder and CEO of Astro, Astro wants to offer a great smartphone experience for a limited budget, something that takes into consideration Zimbabwean consumers’ improving tastes as well as the current economic situation where disposable incomes only allow for a limited investment into mobile devices.

5 Astro Slide devices were unveiled at the event, with prices ranging from $99 for the new Astro entry level Slide S4.5, up to $499 for the Astro Slide Note, a phablet and the series’ flagship device that comes with a smartwatch.

The devices are now available for pre-orders, and will be distributed countrywide by mid-December. The interesting bit from the launch, however, was the distribution model that Astro is now adopting.

Rather than retail its own devices, Astro will now focus on distribution agent partnerships with several retail entities such as Truworths as well as mobile network operators. This is a divorce from its current model where it sold the bulk of its devices in its own flagship stores.

Gwatidzo says Astro won’t be shutting down its old distribution network, but will instead focus on the retail partnerships as this arrangement helps mitigate the costs of distribution through a working arrangement with retailers that already have an understanding of specific market segments.

While Astro has managed to build a recognised name in mobile devices, there are constraints that come with rolling out an individual network even in a market as condensed as Zimbabwe. Its a huge consideration for other entry-level smartphone distributors like Tecno that are only entering the Zimbabwean market now.

It’s also been the same approach used by  Huawei, the Chinese mobile phone giant. Most of its distribution was centred on partnerships with mobile networks, with a limited Huawei branded shop presence.

In any case, all of this is just tactical thought. The real work will come in selling the devices to consumers that now understand what a good phone means for them and are willing to try the next option odwn the road. Astro Mobile, and every other smartphone distributor will need to score highly on the product quality side to do that. No amount of redesign and renewed focus will beat that.