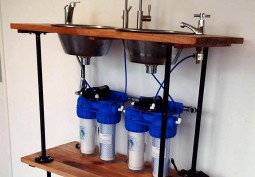 Valley News reports today that Econet Wireless has shut down and put up for auction its water purifying company, Seldon Technologies. Since 2011, Econet Global had pumped some US $20 million investment into the US based company.

Concluding what is likely one of the Econet group’s biggest investment missteps, the company this month hired an auctioneer to sell off the company’s assets, mainly IP at a reserve price of $1.5 million. Econet is reported to have owned 85% of the company. Seldon Technologies supplied the water purification products that Econet sold in Zimbabwe and planned to distribute in Africa.

According to Valley News, Econet Wireless initiated the investment in Seldon Technologies back in 2011 when Strive Masiyiwa was referred to the startup by staff at Carbon War Room in Washington DC, where he is a co-founder. After providing convertible debt in the hundreds of thousands initially, Econet eventually made a $10 million investment in the company in February 2012, which included $1 million for distribution rights for Seldon’s devices in Africa. It was in 2013 though that Econet acquired a major stake in the company.

A problem however surfaced in 2013. According to Valley News, confidential business plans revealed that Seldon’s  patented innovation, the carbon nanotubes meant to purify water by filtering out contaminants, actually “had little or no effect on performance” of the filtration. Essentially, the company’s secret sauce, it turned out, wasn’t doing much. It was ordinary filtration technology in common use that was being used.

Econet also found that the company had no capacity to commercialise their technology. A turnaround strategy was formulated and Econet even temporarily appointed its Johannesburg based group executives to oversee the company, but the turnaround failed. Another $10 million dollars later and after realising the company couldn’t sell nearly enough devices to keep itself afloat, a decision was made to find other investors for Seldon.

To go back a bit. Before Econet came along, Seldon had already spent some $27 million dollars in grants from the US government. No doubt therefore, Strive saw an opportunity to capitalise on that expensive R&D already paid for, invest some of his company’s money and provide the missing link of a huge market for clean water that is Africa.

Unfortunately, the discovery that Seldon’s technology wasn’t unique (at least not yet) changed the whole picture and we’re sure also impacted on the attractiveness of Seldon to new investors.

The founder of Seldon explains this lack of differentiation in a response to Valley News: “There are a lot of people out there that have activated carbon filters, (so Seldon is) one of a thousand companies.” That makes it “impossible to get product differentiation,”. An Econet executive, Myers, disagrees saying Seldon’s non-nanotube technology is superior to any filter currently on the market, but considering this is Seldon founder perspective vs investor, it’s hard to agree with Myers.

Another report says the US office 32 workers that were laid off as part of the shut down somehow suspected that Econet was shutting the US office so it could simply use Seldon’s patents to restart the company outside the U.S.

The shutdown follows the poor performance of the Zimbabwean economy where the Econet Group’s key profit making company, Econet Wireless Zimbabwe, is located. The Seldon Technologies company and Seldon Water operations are not listed anymore on the Econet group corporate website.

17 thoughts on “Econet shuts down water filtration company, Seldon. Assets up for auction”