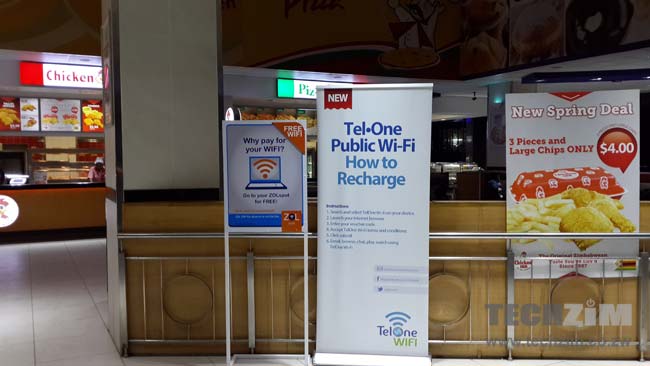 The two agreed on an arrangement which placed TelOne WiFi hotspots in some of the Innscor food outlets. It was meant to give Innscor customers access to WiFi while offering TelOne an opportunity to grow its presence by tapping into Innscor’s extensive and expanding branch network.

It was later revealed that the arrangement between Innscor and TelOne wasn’t exclusive and that Liquid Telecom, through its Internet service provider ZOL, was involved with Innscor with its own WiFi hotspots. As it stands, both ZOL and TelOne are providing WiFi at certain Innscor outlets.

For anyone looking for a decent WiFi hotspot, the opportunity that is being provided by Innscor’s tango with these internet providers can’t be overstated. Besides being able to access the internet in a good environment, there’s the hotspot visibility provided by a Chicken Inn/Pizza Inn banner.

This arrangement will likely be replicated by other internet providers and food outlets, but before that happens, there are some issues that need to be addressed by Innscor and whoever wants to try the same sort of partnership.

The first issue is the availability of the service. By our own investigation, the WiFi hotspot presence in food courts isn’t as widespread in Harare as we had initially thought (a number of busy Innscor/Simbisa outlets expressed ignorance of this service and directed us to the Kwame Nkrumah outlet).

This might be an issue of a delayed service rollout, or it might be influenced by the vague benefit for Innscor that isn’t so easy to qualify versus its fast food business model. No matter how awesome a WiFi service is for a fast food outlet, it still doesn’t fully complement a model that primarily works through takeaways.

Whatever the case, it’s something that needs to examined, considering the huge potential that lies in WiFi service provision for a market where almost all the internet connections are through mobile devices.

As much as WiFi hotspots are now commonplace in Zimbabwean Internet, and can provide affordable internet for a country where mobile broadband is expensive, they haven’t been extended to areas outside the Central Business District and specific neighbourhoods.

It’s up to not only ZOL and TelOne but every other internet provider to consider setting up hotspots in other areas with high traffic density. Perhaps hotspots in high-density areas where home internet solutions aren’t snapped up as significantly could be an option for much-needed revenue?

The second issue ties in closely with the first – Service providers have to share information about their service. I doubt the WiFi banners that were placed inside food courts are doing enough to highlight the presence of a WiFi service or explain how it works.

Sitting inside Chicken Inn with a laptop on always attracts questions from other patrons who ask if you are on the internet, how you are accessing it and whether its free or not. This is the same scenario that I experienced at various hotspots around Harare, suggesting that he market is keen for such a service, but they just don’t know that it’s there and how to use it.

It would appear that these Internet providers haven’t given more mind share to the way they can educate the market on their WiFi services. This extends not only to telling people where to get the service or that it’s there but also to explaining how to use the service.

The last consideration for Innscor would be to sell the WiFi. You’ve already set up the hotspots, so why not sell the WiFi as well. This could also complement the efforts to share information on the WiFi service, something best done when you are selling the same product.

Have you used TelOne and ZOL WiFi at any Innscor outlet? What were your thoughts on this service?