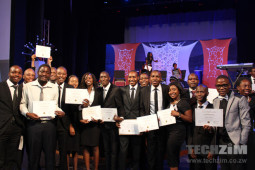 After more than six months of training and skills development, local technology and entrepreneurship skills centre, Muzinda Hub, conferred certificates to its first cohort of software developers and tech entrepreneurs at a graduation ceremony held in Harare.

About 700 students from the initial group of 1,000 developers received certificates that marked their completion of a training programme that was using material from e-learning platform, Treehouse. The graduates have now been equipped with skills in different areas in tech which include Android and iOS app development, web development, social media, and graphic design.

Other than the attendance by the students and their parents, some executives from Econet Zimbabwe were present, including Douglas Mboweni, the telecoms operator’s CEO, who gave a the keynote address.

Muzinda Hub is part of Econet Zimbabwe, and in Mboweni’s delivery, he touched on the contribution that the new graduates would be anticipated to make to technology, including in areas such as Internet of Things (IoT) where Econet has been extending its focus through services such as Connected Home and Connected Car.

Speaking at the graduation, Tendai Mashingaidze, the head of Muzinda Hub, mentioned that the graduates’ relationship with Muzinda Hub would extend beyond the training they had received, as they would be able to hire out their skills through Muzinda Hub’s new online freelancing platform, muzindahub.com.

According to Muzinda Hub, the platform has been developed to offer the developers and tech entrepreneurs that take part in its skills development programme an opportunity to sell their skills to a global audience through a channel that is anticipated to be globally recognisable.

Here are some pictures form the graduation ceremony.