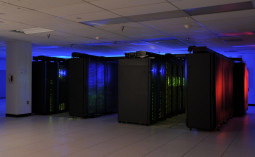 It’s not quite time yet to be doing “the year in review” articles, but here’s one thing that flew below my radar: Zimbabwe officially launched a 36-teraflop supercomputer in February 2015.

The supercomputer, housed at the University of Zimbabwe’s Zimbabwe Centre for High Performance Computing (Zim-CHPC), was installed by Inspur Group of China  funded by a $5,4 million loan courtesy of the Chinese government. Zimbabwe became the third (or fifth – depending on who you ask) African country to host a supercomputer, and number 2 on the continent in terms of raw computing performance.

Wikipedia describes a supercomputer as “a computer with a high-level computational capacity compared to a general-purpose computer”. The speed of a supercomputer is measured in FLoating-point Operations Per Second (FLOPS or flops), and the designation of ’36 teraflops’ means at its peak speed, the supercomputer can execute 36 trillion floating point operations.

For a rough benchmark of how that stacks up against the best in the world: the current number 1 supercomputer (China’s Tianhe-2) clocks in at 33,867 petaflops (33 867 quadrillion FLOPS, or 33 867 teraflops – though I probably don’t need to convert between trillions and quadrillions for our Zimbabwean readers). Supercomputer number 500 runs at less impressive 164 teraflops. More on the Tianhe-2: it has just over 3,1 million Intel Xeon processor cores and has a power draw of 17,8 Megawatts – which is more than half of what ZESA is currently producing at its Harare power station (30 Megawatts).

Supercomputers excel at solving compute-heavy research problems such as modelling or simulation of anything from weather, biochemical processes, to nuclear explosions. The US government has banned the export of supercomputers or supercomputer components to countries suspected of doing nuclear research on supercomputers (including China). A possible unintended side-effect of the US export ban to China is the kick-starting of China’s supercomputing industry. Additionally, enforcing the ban is challenging in practice because (some) supercomputers are mostly off-the-shelf server components with accelerators and high-performance network gear, so much so that the Zim-CHPC cluster could fit on one rack (disclaimer: I haven’t seen it).

The UZ has stated that it has plans to partner with academia, research and the private sector on applications across varying fields, with explicit shout-outs to life-sciences and mineral explorations. My hope is that the UZ introduces a programme (or at least a course for pre-existing programmes) that teaches High Performance Computing.