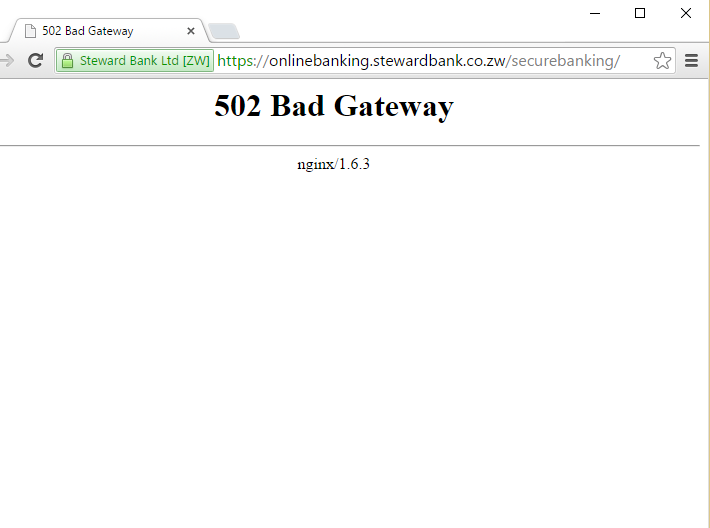 Steward Bank’s internet banking platform has been down for more than two weeks. Information we’ve received says that bank initially took their systems down for maintenance more than two weeks ago, a process expected to take just a few hours. Weeks later, customers are yet to use it without problems. Visit the bank’s internet banking website right now gives out the error captured in the screenshot above.

We contacted the company to understand what exactly is going on and they told us the problem is actually not limited to internet banking. EcoCashSave, the company’s mobile money savings account of sorts, is also having issues.

Here’s what they told us:

Following the recent planned system upgrade, we wish to advise that our Internet Banking and EcoCashSave systems have been unstable. Our technical experts are currently onsite to restore full service on both platforms by end of day Saturday, 5th December 2015, ahead of a busy Christmas period.

The good thing with Steward Bank is that with agents everywhere the inconvenience of them not being available on the internet is reduced. The bad is that this is 2015 and really, being offline even for just a few hours is not acceptable. It should be minutes at most.

And now for a bank that prides itself on technology and being in touch with the young, we’re guessing something must be seriously wrong for it to last this long. If it’s just planned maintenance gone wrong as suggested in the statement above, then clearly more planning will be need in future. If it’s something else that they’re not saying (the group has been known to not say the whole truth ) it’d be quite unfortunate.

The bank is owned by Econet Wireless, Zimbabwe’s largest mobile telecoms company by number of subscribers and revenue.