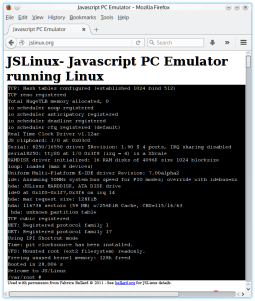 If one of your resolutions for 2016 is “learn/brush-up on Linux”, but you’re (already) feeling too lazy to set up Virtualbox or a HD partition, rejoice, for you can boot up and run Linux (CLI) in a browser tab.

Don’t believe me? Checkout http://jslinux.org/. It’s not a remote connection to a Linux session running somewhere in the cloud, but honest-to-God Linux running in your browser via emulation. Javascript is used to emulate a real processor (and other hardware bits) necessary for a “computer”, and as far as the kernel knows, it is running on a real computer. This rather similar to how Virtualbox and VMWare work, but only in a browser.

Also included are the userspace utilities expected on Linux (including GCC, but no X/GUI). The author of JsLinux, Fabrice Bellard, is a very prolific with an impressive track record: QEMU (integral to KVM, the dominant Linux hypervisor), FFMpeg (used by Chrome, VLC and countless other media players. Also used by YouTube and Dropbox for video encoding). He also came up with a new formula for calculating Pi which allowed him to break the world record for the most precise calculation (previously held by a multi-million dollar supercomputer) on his desktop computer.