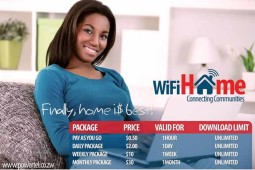 Barely a week after introducing its unlimited Fibre to the Home suite, Powertel, a State-owned Internet Access Provider has introduced unlimited WiFi packages for school, home and business users.

Powertel is calling the packages game changers on social media, mostly because they ultimately position it as the provider of the cheapest unlimited broadband packages on the market.

WiFi Ed, which is designed for students offers 1 hour of unlimited internet access for 50 cents, a day’s access for $1 and weekly access for $5. It’s not as generous as the Powertel Mobile Broadband Scholar Pack from 2 years ago which was pegged at 50 cents a day, but it does give students a worthwhile broadband choice in the face of expensive internet alternatives.

Home users have WiFi Home, which has a Pay-as-You-Go hourly access for 50 cents, a daily package for $2, weekly access for $10 and a $30 monthly package.

Business users (small businesses in this case) have been offered WiFi Biz, which also has a 50 cent for one hour’s access, but comes with a $2.50 daily package, $15 weekly package and monthly unlimited internet for $49.

Speeds haven’t been specified but according to Powertel, they vary depending on where you are accessing the service from. To access these packages, you will need a wifi device like Powertel’s $76 “mifi” modem.

All packages easily outdo the previous “unlimited internet” iterations that Powertel has tinkered with for over a year. In September 2014, it antagonised the market by terminating its unlimited service and adopting a usage-based model.

This was followed by a series of promotions and conditionally unlimited packages that were topped most recently by a three-month festive season promotion offering $50-a-month unlimited internet.

With the positive response that the $1.20 a day unlimited internet package had, it’s safe to assume that the market is going to respond positively to this new offer. More imprtantly, it could have an impact on prices from other internet providers.