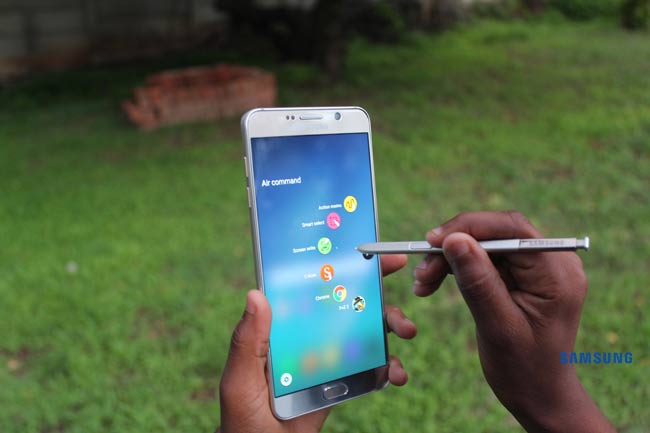 This article is sponsored by Samsung

For close to a decade premium devices have been experiencing countless changes thanks to the intense competition that exists among brands as well as changing consumer trends.

Everyone wants an even better device than the last with even more impressive features. That’s the logic behind devices like the Samsung Galaxy Note 5.

Launched in August 2015, the Galaxy Note 5 is the latest in its range, offering a lot more than its predecessors, along with enough compelling evidence that Samsung is catering for consumers that want more. We took a close look at the Note 5 to figure out what Samsung had mashed up in its latest phablet. 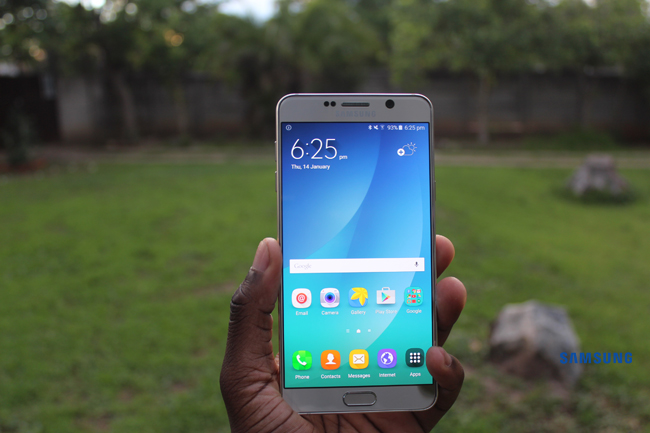 Like the Note 4 before it, the Samsung Galaxy Note 5 has enormous presence. It’s what you’d expect from phone and tablet cross, and you feel the difference the moment you place it in your hands. As far as borrowing from past designs, the size and immediate feel is where the physical similarities seem to end off. 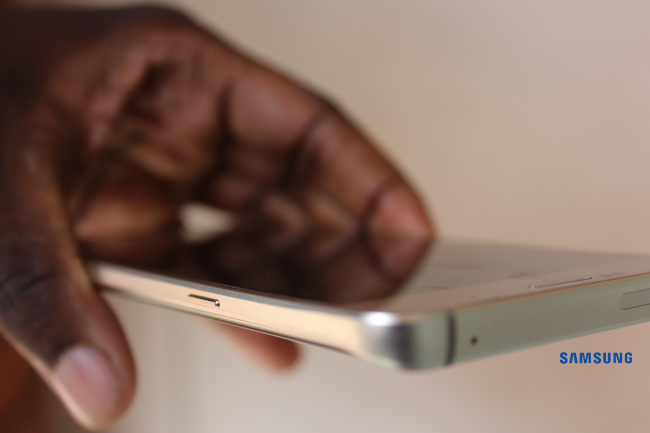 It should be noted, however, that it is smaller than the Note 4, weighing in at slightly lighter 171g with a slightly thinner frame. 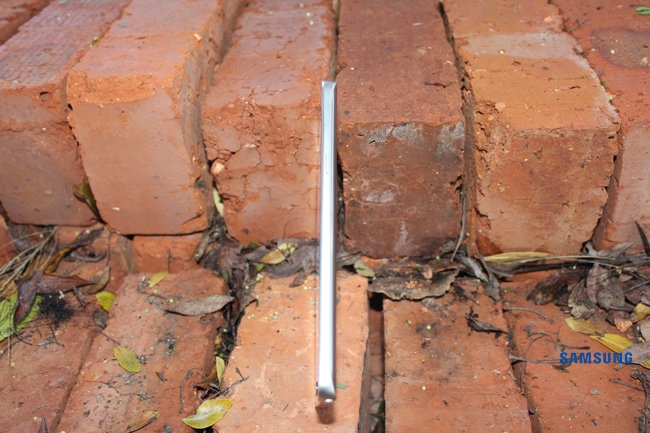 The Note 5 sports the metal and glass exterior that Samsung seems to have made standard for all its premium devices and the really impressive chamfered metal design on the sides are great at presenting the new high-end look that Samsung is clearly going for with the phones in this range. 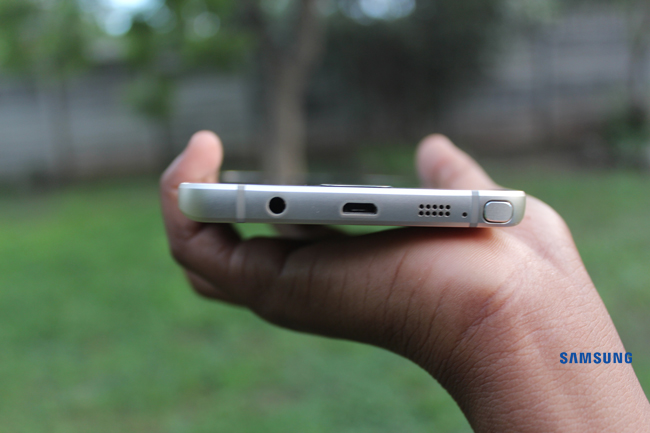 There are antenna bands at the top and bottom of the device, with the base of the Note 5 carrying an ensconced slot for the iconic stylus pen along with an awkwardly placed speaker, USB 2.0 port and phone jack in that order.

You’ll also notice the curved glass rear which is a lot similar to the Galaxy S6 Edge posterior in terms of both captivating look and the potential to get fingerprint smudges with every touch.

Just like it’s smaller sibling the S6 Edge, phrases like “oozes with sex appeal” are top of mind when you are getting a feel of the Note 5 and soaking in the design detail, which suggest that cases for such a device are the last thing you’d want really. It’s probably better to invest in some skins and try as much as possible to handle the very, very slippery Note 5 with careful hands.

There is a protruding rear camera at the back right next to the sensor (which can also act as a heart rate monitor) and the front is pretty standard Samsung detail with the home button (which has a fingerprint sensor). Similarly the power button is on the right and the disjointed volume buttons on the left. 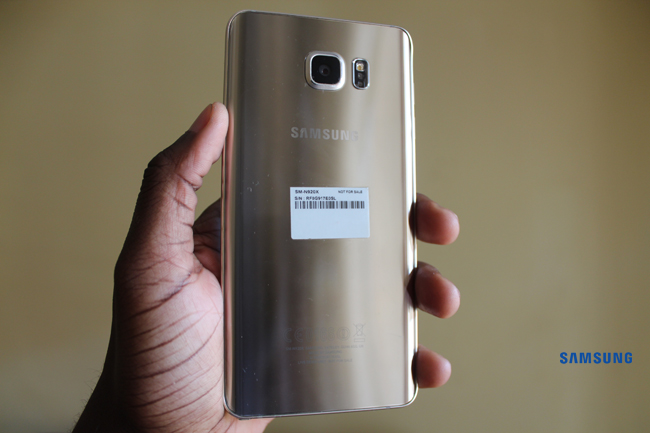 All that metal and glass has also meant another running theme in post 2014 mobile design. The battery is non removable, creating the same challenges that people with a fetish for spare power units have bemoaned.

You are stuck with a 3,000 mAh battery which might seem generous for other devices but won’t last forever on a big screen phablet with a monster display.

A single charge is good enough to get you through a working day, assuming you are just handling light activities like a bit of Instant Messaging, social media goof-balling, erratic email activity and some isolated pictures. 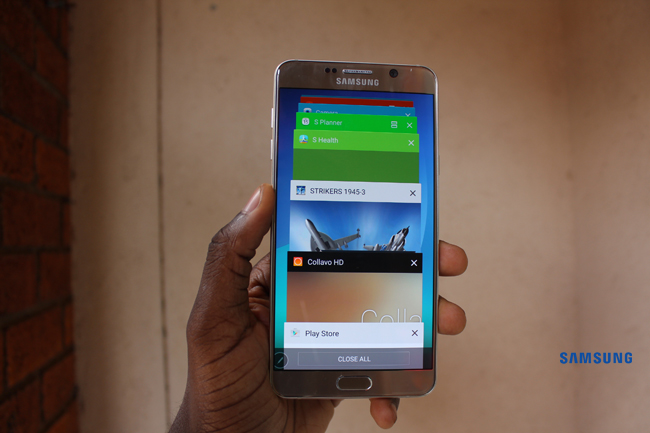 However, when you move into more power-hungry activities like gaming, video watching and some serious snapping, all of which the Note 5 is really really good at, you’ll definitely need another charge or perhaps a power bank.

Samsung has officially deflected these challenges by emphasizing its Fast Charging feature which gives you a decent amount of power on a charge of 10 to 15 minutes. It’s the sort of power pick up during the day if you are a busy individual who can only afford to put down your phone for a limited amount of time.

Still on the closed device issue, the Note 5 doesn’t have expandable memory so you have to make do with either the 32 GB or 64 GB allowance. Any more content will have to be backed onto the cloud, once again proving that Samsung has the premium sort of buyer in mind who can afford constant data access. 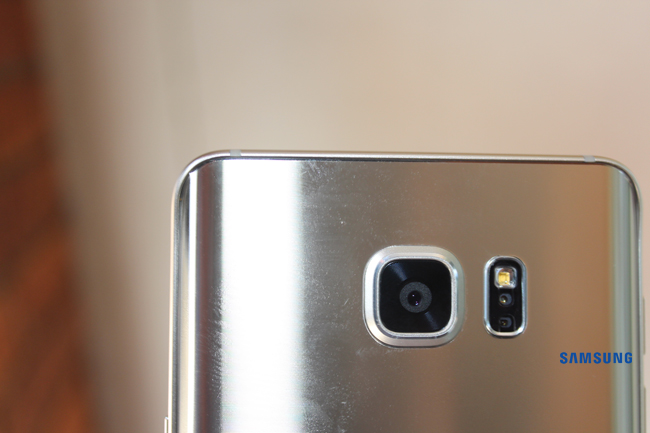 The two areas where the Note 5 really gets marks of distinction are its screen and the camera. The device comes with a 5.7 inch Super AMOLED display with a 1440*2560 resolution, 518 ppi density and Quad HD resolution. The screen is very bright and will give a very pleasing delivery even when viewing it outdoors.

Viewing images and video is thoroughly engaging on such a screen and the very generous acreage give it a firm claim to the title of best screen on mobile devices.

What helps sell this idea are the images and video that you can take with the 16 MP rear camera or the 5MP front snapper. Other than the mega pixels the camera specs include a f/1.9 aperture which just translates to great handling of light, the legendary Optimal Image Stabilization (OIS) autofocus and all the other bells and whistles that are part of flagship phone delivery.

As a result images are crisp and details are captured with ease, giving the impression that some shots are taken by a pro and filtered even when its just an amateur hand at play.

Software and everything underneath 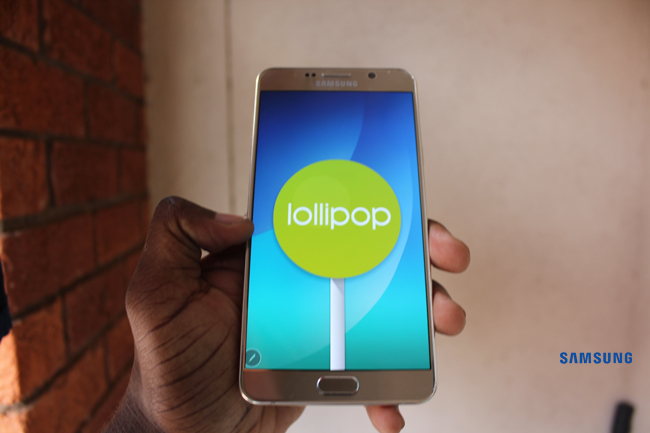 In terms of software the Note 5 is powered by the same Android 5.1.1 Lollipop version that is pretty much standard on the recent Samsung offerings. As its premium device in the big boys club its set to get an update to the latest Android before other models.

This, however isn’t that much of a let down because the Note 5 performs well with the Lollipop version and the TouchWiz User Interface giving options for changing themes to give your device a different feel. 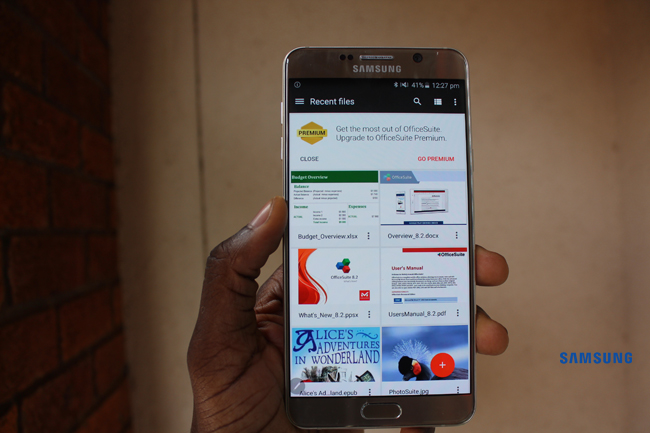 Samsung has also loaded the Note 5 with its standard pre-installed apps for things like health, planning and voice recordings that are now commonplace across the stable.

It comes with 4GB RAM options for 32 or 64 GB Storage, Exynos 7420 chipset and a octacore processor. It’s built to handle wireless charging and it also supports 4G/LTE as well as NFC. 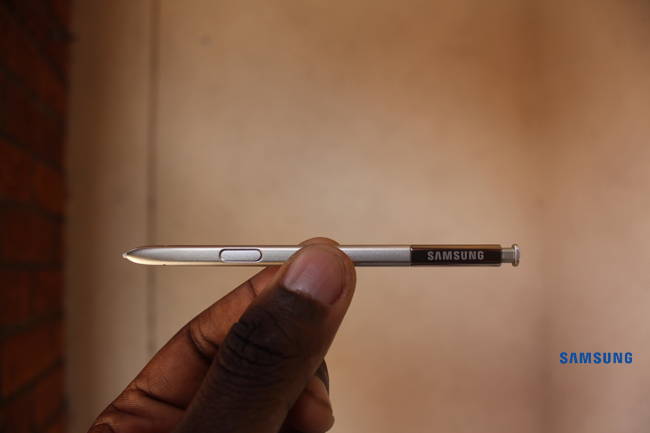 What does have its own menu and feel is the stylus called the S Pen. It is retractable from its slot via a clicking feature and has a host of captivating features that bring you back to the high-end/executive members only experience of the phone. 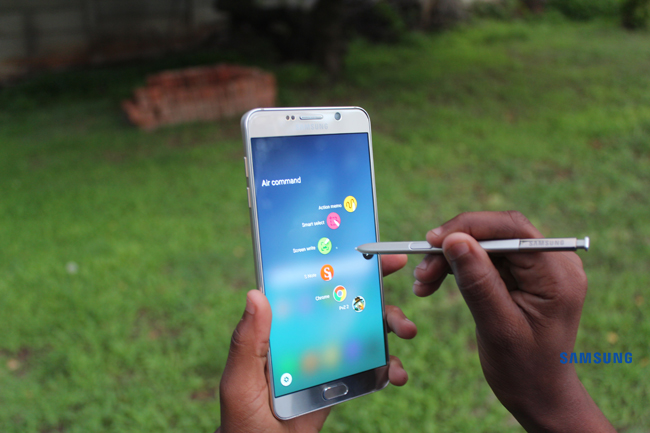 This add on lets you perform some pretty impressive tasks. Through the Air Command hub which powers the S Pen you have features like Action Memo that uses notes as reminders; Smart Select which lets you capture parts of your screen; and Screen Write which is a cool screenshots option which lets you write on them.

You can also write a note on your screen without turning it on before saving the note as a memo and the Note 5 handles handwriting recognition impressively.

Verdict – An awesome device that puts up an enormous show 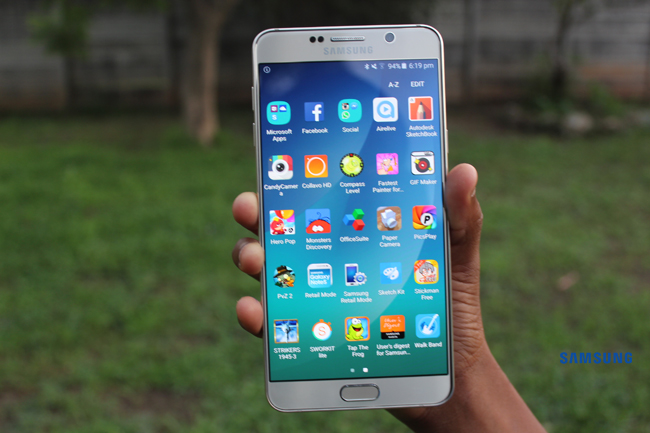 This is one device that will give you a reason to toast to the countless incremental changes that happen in consumer technology. With an amazing performance and insane features that will blow your mind away, the Note 5 is one reason you’ll be glad Samsung has been tinkering with other models before this just to make a monster of a phone.

The average price tag for one of these in Zimbabwe from online retailers is somewhere in the late $800s to early $900s field so you can expect anything topping off at that range to be somewhat reasonable. A warranty is guaranteed from approved Samsung distributors. 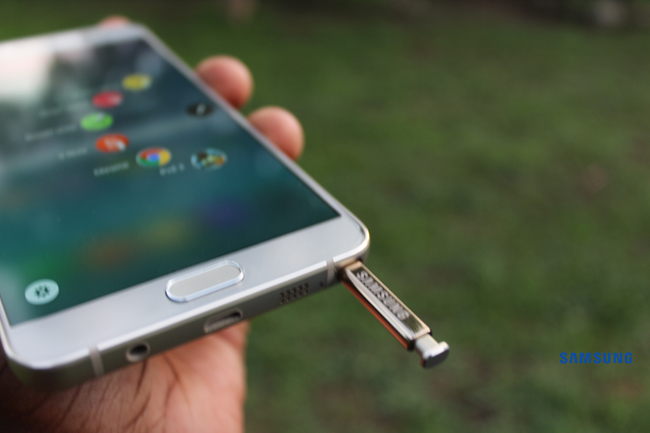 For that price and the prestige that oozes from this senior Statesman of cellphones, Samsung seems to be targeting the sort of buyer who can dig into very deep pockets to appreciate all its features. It’s definitely the right sort of phone if you are in that lane.