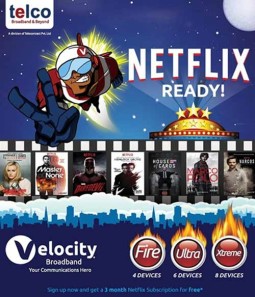 The Netflix craze that started when the Video On Demand service officially launched around the world earlier this month hasn’t died down yet. Local internet access provider Telecontract, more commonly referred to as Telco, is also tapping into the VOD service’s appeal to push its broadband packages.

New users who sign up for any of Telco Velocity Broadband’s unlimited internet packages (the $128 Fire, the $185 Ultra and the $208 Extreme) will get a free 3-month subscription to Netflix. Certain Terms and Conditions apply here, which could be referring to the fact that you’ll only get the Netflix package that Telco selects for you.

Telco is selling itself as a “Netflix Ready” internet provider, a theme which its competitors in Fibre to the Home services like ZOL and TelOne have also jumped on with recent advertising campaigns. While Telco is only coming to the Netflix party now, it had been selling its internet with internet TV in mind.

Prior to the #NetflixEverywhere launch, Telco had already launched a $199 Velocity Stream package which it claimed was “optimised” for HD streaming and gaming.

This was in November 2015 and it seemed like a preparation for the VOD wave that had started in South Africa earlier that year and would eventually end up locally.

It stands to reason that internet providers selling ADSL and Fibre packages would adopt such a strategy. Fast and reliable internet is the best bet for data-intensive services like video streaming.

With Netflix and its strong brand value being easy to communicate to most people, the smart move is to capitalise on the brand and use it as the core service that can translate the opportunity of certain types of internet.

There are bound to be new users that can be signed up when unlimited TV and the allure of hit series and extensive movie catalogues are put on the face of internet packages, something definitely worth paying a few months of free months of Netflix for.