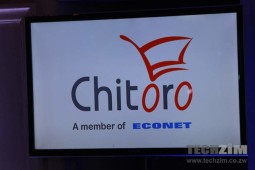 At the event held to announce the partnership between EcoCash Diaspora and Chitoro, one other interesting bit of information was shared. It turns out the Econet Group, the parent company of Econet Wireless Zimbabwe and a slew of other subsidiaries in telecoms and technology, snapped up Chitoro.

The acquisition was made by Cassava Connect Ltd, a privately held subsidiary of the Econet Group. Cassava Connect is registered as a Mauritian entity. The relationship is also displayed on the Chitoro logo which tags the company as “part of Econet”.

In the past, the Econet Group has, through acquisition and other investment strategies, extended its corporate interests in a diverse set of industries that include energy (Solar Way), water purification (Seldon) and telecommunications (Telecel Globe). Chitoro is the first remittance service outfit to be brought into the Econet fold.

According to Haxton Rose, the director of Chitoro, the deal was hammered out in October 2015 and since then both Econet and Chitoro have been working on the necessary integration between the two entities.

He pointed out that the arrangement between EcoCash Diaspora and Chitoro for straight-to-wallet remittances was handled as a separate transaction as EcoCash operates under Econet Wireless Zimbabwe’s Services division, which has its own set of objectives different from the Econet Group.

Rose identified the competitive advantages that would stem from such arrangements, something that competing remittance services try to achieve, albeit as an external entity.

While no exact future plans were mentioned for Chitoro within Econet, the possibilities that easily come to mind lie in mashups with mobile money services that are being offered through Econet’s mobile telecoms and financial services entities in Zimbabwe, South Africa, Lesotho (Econet Telecom Lesotho), Burundi (Leo Burundi) and the Central African Republic (through Telecel RCA)

Chitoro’s involvement with EcoCash Zimbabwe and Econet South Africa through Ecocash Diaspora might have been an exclusive event but it’s as good a precursor as any on what the UK-based Bureau de Change and remittance company will do next.

One thought on “Econet Group acquires Chitoro, a UK based money remittance firm”