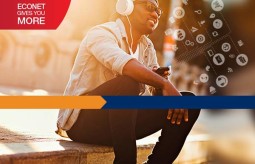 Despite the changes in voice call patterns that have been influenced by options for communication like instant messaging, mobile operators aren’t giving up on voice call packages just yet.

The latest attempt is from Econet which has just recently launched the 10 to 5 Nite Talk Promotion. This service gives prepaid subscribers 15 minutes of free talk time for calls made between 10 pm and 5 am from Monday to Thursday.

The off-peak offer only kicks in when a subscriber makes a call of at least 1 minute during that period, after which the 15 minutes can be redeemed at any point for any call made to an Econet number during those hours.

It’s another example of feel-good voice promotions that add value to subscribers while limiting the network’s exposure to any sort of strain caused by traffic. Another example of this is the Free Good Morning Call which was introduced last year.

At the very least, the promotion will trigger off-peak voice calling and reward subscribers while the best case scenario would be an increase in call traffic which goes beyond the 15-minute freebie. It’s fair to assume that these low-key promotions might not necessarily have such a huge contribution to voice revenues straight away, but in the face of declining profits, they merit some form of consideration.

Another benefit appears to be the creation of some form of competition to off-peak promos from Econet’s competition. NetOne, the country’s second-largest operator currently has its finger on the off peak voice promo pulse with it’s never-ending $1 a Day Promo.

This product, which provides subscribers who recharge with a $1 in airtime, with free on-net calls from 10 pm to 5 am, has been a huge success for the State-owned operator. netOne has even attributed part of its subscriber number growth to the promotion a scenarion which should rightfully grab the attention of Econet.