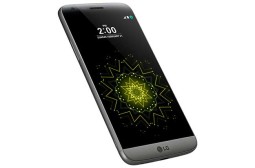 Zimbabwe is Android country powered by a huge appetite for Samsung. That’s what the data suggests anyway. As a result, a lot of attention is on Samsung devices, particularly its flagship Galaxy series and like the rest of the world, we waited for Mobile World Congress 2016 (MWC 2016) to see what the Korean giant would bring.

MWC is one of technology’s annual global “geek fests” which started on the 21st of February and is winding down right now. Some of what had been anticipated was unveiled by the major names in technology that have turned this annual event into a showcase for their work.

Like every other year, there was hype around Samsung’s  well-marketed Galaxy S7 and S7 Plus. It wasn’t the only giant showing off, though. Companies like Huawei, Microsoft, CAT, Facebook, Sony, LG have all been displaying their latest technology.

One device that really caught people’s attention, though, was the new LG G5. This is the latest flagship mobile phone from the Korean tech giant designed as an iteration of its G4 device.

Unveiled on the same day as Samsung’s S7, (the 21st of February or MWC 2016 Day 1) it has fired some serious shots at Samsung, the leader in the Android devices segment.

What does it have?

The LG G5 comes with an all-aluminium body (available in titan (or dark grey), silver, pink and gold) which houses a fairly interesting set of specs.

There’s a 5.3-inch screen with a (2560 x 1440 pixel) high-resolution display, a Qualcomm Snapdragon 820 octa-core chipset, 4GB of RAM, 32 GB onboard memory (expandable with a Micro SD of up to 200 GB), an 8 megapixel front camera, two rear cameras (16 megapixels for the first and a second 8-megapixel shooter for wide angle shots), and a 2,800mAh removable battery.

The LG G5 runs on Android’s Marshmallow 6.0 and supports the latest connection conventions like Bluetooth, 11ac dual-band Wi-Fi, NFC and Infrared. And yes it also has a fingerprint scanner.

It’s not just a set of ordinary specs that steal the show for the LG G5, though. The device has been paired with a set of accessories, called LG Friends, which are designed to expand its functionality and offer an even better User Experience.

The removable battery creates a slot not just for a new power pack, but an accessories slot. This accommodates tow of the LG Friends.  There’s the LG Cam Plus, which gives a better camera grip for taking shots with one hand while it also boosts battery from 2,800mAh to 4,000mAh.

There’s also the LG Hi-Fi Plus which is an external 32-bit amplifier. It is a joint effort with sound hardware outfit Bang & Olufsen and it supports native DSD playback. It’s accompanied by a pair of H3 B&O Play earphones.

The other two “friends” are the LG 360 VR a Virtual Reality Headset and the LG 360 Cam which is a 360 camera designed top capture full angle shots.

Is this enough to beat Galaxy S7 and dominate Android?

From first impressions, it would seem so. LG has managed to use modular designing to offer its buyers a chance to experience so much more of a device that is out to reinspire faith in the company.

As a Samsung fan, I’ll be the first to admit that LG is geared to outpace Samsung this year because the Galaxy S7, from first impressions, looks like a set of minor tweaks from the exceptional Galaxy S6. LG, however, really went beyond just the minor changes and these Friends add another twist to what LG means.

With all marquee brands in mobile tech really churning out awesome devices, it takes some out of the ordinary thinking to exceed the next brand. The LG G5 looks like the sort of device to do that, even of it means it gets by with a little help from its friends.