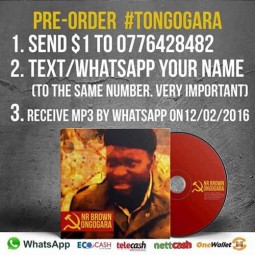 It’s inevitable that as technology continues to change so will music distribution and the artists who stand any chance of getting something out of their content are the ones who embrace the evolution rather than run from it.

In Zimbabwe, we don’t see enough of this evolution, which is why the strategy that’s just been used by local Hip Hop superstar Jnr Brown has caught a lot of people’s attention.

The rap artist’s latest single, Tongogara, from his upcoming album Morning Glory, is being distributed via WhatsApp for $1 with fans paying for the track via mobile money. So far it has earned the artist over US$5,000 in less than a week.

On the 7th of February 2016, Jnr Brown shared a brief promo clip of Tongogara on social media, with calls for pre-orders to the track. However, the buzz around the track actually spiked when a live radio station recording at Star FM was also shared online two days later, creating a strong engagement, especially on Facebook where it generated over 40,000 views.

On the same day, the advert for pre-orders to the track was also shared on the same familiar platforms (Facebook, Twitter, YouTube) with an mp3 version of the track scheduled for delivery to buyers on the 12th of February. Fans were asked to send $1 via mobile money to a specific number as well as their name to the same number for purposes of identification.

In the five days after the advert was posted, over 5,000 paid-up orders were processed, earning over US$5,000 for the single, a number which Jnr Brown’s team hadn’t anticipated.

According to Kuda Musasiwa (more popularly known as Begotten Sun), the man who works as Jnr Brown’s executive producer and the coordinator of this new content distribution route, the entire approach was actually an experiment inspired by the massive response that Hip Hop artists like Jnr Brown have enjoyed on social media.

Teaser posts generally enjoy massive engagement, which is usually accompanied by requests for the complete track. Jnr Brown’s crew decided to tie this in with an option for payment that would involve his local fans who aren’t exposed to convenient purchase and payment options for the latest hit tracks.

By introducing an option for mobile money payment (EcoCash, Telecash, OneWallet, and Nettcash are all accommodated),  tying it to WhatsApp which is the most popular media transfer channel for mobile broadband users, while underpinning this with a promotion through social media staples like Facebook and Twitter, Jnr Brown was able to reach out to fans that were eager to get their hands on the new single.

It’s also worth noting that the song has a decent price (it’s just a $1 and that doesn’t have any additional mobile money charges) and it has been well received by fans and critics who have rightfully showered it with a lot of praise for relevance and artistic excellence.

Right now Jnr Brown is enjoying a fair return on his hit but he has also been working on the video for the song and follow-up singles on his upcoming album. The revenue being generated from this WhatsApp route is clearly welcome, but sadly it can’t be tapped as a permanent solution for content distribution.

Besides the huge complication that rears its head through a potential ban from WhatsApp (the IM platform does not condone any commercial use of an account and a spike in traffic triggers such a ban) there’s the hassle of manually handling all requests for tracks, something that can’t be adopted for consistent content distribution.

Musasiwa believes an application which ties into any of the mobile money services and allows users to buy access to tracks via USSD commands would make the whole process easier. This way, fans can get a code which is used for redeeming tracks, albums, concert tickets or even artists’ merchandise.

With service providers like mobile operators hopping on board, this could open the door to a convenient revenue stream for artists and other content creators, especially since operators can enjoy revenue through mobile money payments while encouraging online engagement.

It sounds a lot like what Astro had in mind with its Mobi Store, as well as what the Zimbabwe Music Rights Association (ZIMURA) has been working on forever. The two attempts are yet to see the light of day but some of the people in the local music industry have shared a lot of concerns about how robust and reliable these alternatives would be.

In the meantime, the WhatsApp/Mobile money route will likely be used not only by Jnr Brown but by other artists keen on capturing the wave of excitement around their next hit track.

It won’t kill piracy, but it will ensure some sort of revenue is earned from their work. More importantly, it will be a very bold way of embracing the evolution of music distribution.