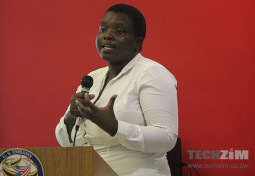 Techwomen Zimbabwe, a local organisation which has been championing the inclusion of girls and women in STEM (Science Technology, Engineering and Mathematics) related careers and fields, will be hosting a delegation of women from Silicon Valley from the 21st to the 27th of February 2016.

The 8 delegates, who work in prominent technology firms that include Twitter, Mozilla, Symantec and Juniper, will be visiting Zimbabwe for mentorship, skills development and training.

The week-long visit will consist of training workshops and career guidance meetups to be held in schools and tertiary learning institutions in Harare, Bulawayo and Bindura which include Harare Girls High School, the National University of Science and Technology, Bindura University of Science Education, as well as rural centres outside Bindura.

A handful of local entities which include the Ministry of Higher and Tertiary Education Science and Technology Development, Africom, Telecel, Logicode, Harare Institute of Technology and Bindura University have pledged their support to Techwomen Zimbabwe and the United States Embassy for the visit.

According to Rumbidzai Mlambo, the lead coordinator for Techwomen Zimbabwe, a number of events lined up for the visit will be open to everyone keen on engaging in networking and skills development centred around STEM for girls and women.

She also expressed her enthusiasm for Techwomen’s involvement in STEM skills development and career guidance at a time when Zimbabwe is starting a very ambitious drive to encourage the development of STEM appreciation.

STEM, the buzzword for all things geek has been trending lately on a national scale thanks to the offer of free education to high school students opting for that route.

This latest discussion on the advancement of sciences government has attracted a lot of attention for the government and started debates around the feasibility of championing this cause as well as its potential to give Zimbabwe a chance at competing in terms of relevant skills.

Techwomen Zimbabwe has continuously promoted STEM by encouraging girls and women’s participation in sciences. This has been through the running of events like the Technovation Challenge, lobbying for women’s inclusion in the national ICT agenda, mobilising girls to participate in events like the Hour of Code Zimbabwe and running skills development programs for girls in primary and secondary schools.

8 thoughts on “These Zimbabwean techies are bringing Twitter, Mozilla execs to a week-long training program”