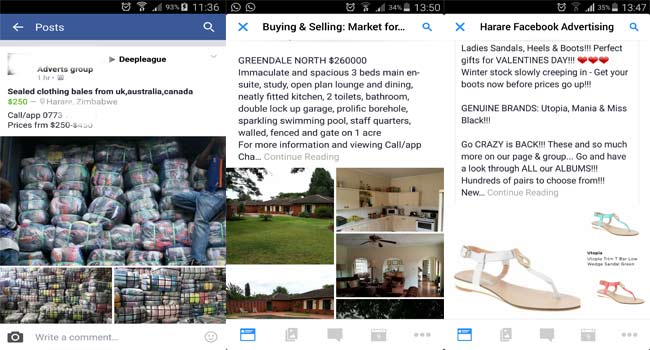 Zimbabweans have an entrepreneurial zeal about them which has been explained as an adaption to a tough environment as well as the appreciation of the profit that comes from addressing some very simple needs.

This spirit of enterprise is often expressed through simple attempts at retailing, creating a situation where people are constantly engaged in trade. As such there’s always a need to match buyers and sellers with the best deal through the most accessible and convenient channel. Which is where product and service advertising, which is always tied to changes in technology, comes in.

People are turning to the most frequented online platforms to explore opportunities in commerce and lately, social networks, especially Facebook, have offered some of the clearest examples of this.

Part of Facebook’s success has been how it has brought people closer to the power of the internet. Facebook Groups, one of the network’s sharing and collaborative-focused features has managed to do that by aggregating users with similar interests and literally providing room to share common interests.

The current Facebook Groups feature was a result of a 2010 overhaul initiated by the social network as a strategy to encourage the aggregation and subsequent interaction among people with similar interests. The change wasn’t a shot in the dark, but a result of data on increased engagement among Facebook users with a common purpose or idea.

More than 5 years and a standalone mobile application later, Groups are now registering 1 billion users a month and have been tapped as tools for political discussion, organisational efficiency and massive user feedback on brands, products and even insight on competing services.

Some entrepreneurs have noted the opportunity behind this and have embraced Groups as the e-commerce suites that they are aptly placed to be, turning them into online classifieds platforms.

A cursory glance at some of the more popular Groups shows an interest in not only news and the latest information on sports or national issues, but a gathering of people keen on exploring the latest deals on goods and services.

Groups like Open Classifieds,  Buy & Sell Zimbabwe, Zimbabwe Cars for Sale, Buying and Selling in Zimbabwe, Sell It($) Zimbabwe, Wedding Planning Zimbabwe, FIND IT IN HARARE, and Zimbabwe Farmers Market display the “Facebook Classifieds” experience that is being enjoyed by the digitally inclined Zimbabwean buyer or seller.

By joining the right group, a user can get the latest deal on anything from wedding services, cars, real estate, IT consumables, horticultural and farm produce, jobs and employment opportunities. There are even groups with dating and relationship advice.

These groups enjoy massive memberships that can exceed 30,000 people at a time, a number that becomes even more endearing when you consider the intense engagement created on various posts for goods or services available or wanted.

Thanks to the well-understood multimedia experience provided by Facebook, users are able to exchange images and videos on what’s being offered or what’s wanted, while using the all too familiar text description to initiate conversation. All this enhances the classifieds experience and sets up Groups as the initial meeting point for the follow-up transaction.

New age competition and the evolution of classifieds

However, Groups are creating a new sort of competitor for the dying offline classifieds model as well as online platforms that have been in the game from the beginning.

Groups classifieds use the same intrinsic strengths that online classifieds have always communicated while leaning on the familial value of a related community that every social media platform has glazed on every other downstream service that it sells to the millions (and in Facebook’s case, billion) of followers that it attracts.

In Zimbabwe, this is amplified by the Facebook bundles, the mobile broadband providers’ over the top services which offer a cheaper access to Facebook adding to its appeal versus any other platform that prompts a user to spend additional broadband just to access it. This appeal is actually going to be amplified by a free access to Facebook that is about to be enabled through Telecel and Free Basics.

With all these factors playing into the online classifieds spectrum and as long as Facebook maintains a permanent place in Zimbabwean internet usage patterns, the rise of the Groups as classifieds platforms is guaranteed.

Right now, competing platforms don’t seem to be jeopardised by Facebook Groups, but in an online sphere where a Facebook service or feature is nipping at your heels or offering a similar value proposition across the road, there is a need to consider ways of embracing the free tool or increasing your own service’s relevance.

Platforms like DeepLeague have established their own Facebook Groups, creating some sort of option for user crossover, a strategy that will probably ensure that the actual platform remains relevant.

The attempt at overtaking a Facebook feature isn’t easy, but zero-rated platforms like Econet’s Ownai seem to be poised to take that route thanks to a free ninety-nine offer.

The strategies or approaches used might change and be tweaked, but the bottom line is that Facebook Groups are are credible online classifieds option that Zimbabweans have embraced.