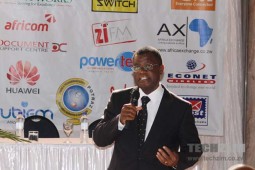 Reward Kangai, the CEO of NetOne makes a presentation at e-Tech Africa 2016

The 2016 edition of government’s e-Tech Africa Expo kicked off yesterday at its familiar venue the Harare International Conference Centre. This year, the two-day conference is running on the theme “Creating a Climate for Innovation and Access to Global Markets”.

The annual conference is meant to create a platform for public and private sector engagement with a focus on presentations from subject experts as well as discussions on areas relevant to Zimbabwean ICT.

This year’s e-tech Africa seems to have fewer exhibitors and a crowd smaller than what is usually registered, something that could be a reflection on a tough operating environment where such engagement takes a back seat to other pressing concerns.Despite that, the event has so far, kicked up some debate on areas that affect the public-private sector relationships.

The first day included  presentations on e-Government (this was made by Professor Bassoppo Moyo from Zimbabwe Open University), Internet Governance and Innovation (presented by Dr Hapanyengwi) e-commerce (presentations were made by Vusi Ndebele from Paynow, Oswald Jumira from Cumii and Dr Bigirimana from Africa University) and virtual banking (delivered by Dr. Ismail Ali from ITS).

A keen focus was placed on Cybersecurity, telemedicine, e-waste. These areas were explored at length by local and foreign presenters who included Dr Moyo from Chitungwiza Hospital where telemedicine has been piloted for Zimbabwe, and Eng. Gweme from SIRDC which has been researching e-waste’s impact locally.

They drew from successful models in other markets and touched on the need for private sector involvement in the rollout of solutions that affect the government, State institutions and ultimately the citizens of Zimbabwe.

There was some debate on the need for legislation that supports these areas, something that the Ministry of ICT has been pledging to push through with its National ICT Policy and supporting bills.

Today, the Expo, which is open to the public, will be officially opened by the Minister of ICT and there will be a focus on telecoms infrastructure sharing and fibre connectivity.

Here are some pictures from Day 1 of e-Tech Africa.