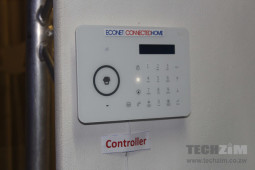 As we had mentioned earlier, Econet Wireless launched a new Connected Lifestyle product, but unlike what we had anticipated, this was the official launch of the Connected Home service.

This is the same home security kit that was first unveiled last year at the Beyond The Phone Expo. It’s designed to offer home surveillance and security, automated services for some domestic features, and a rapid response signal in case of a burglary.

The system is supported by SMS as well as a mobile application (zero-rated, of course) that gives notifications to selected users (up to 5) on any intrusions while offering an option for personal video surveillance on a property.

The ConnectedHome standard package has a $70 installation charge, which is followed by a $25 monthly premium ($35 a month if you sign up for Rapid Response) for 24 months. After that, the systems is all yours, and you can still put up $15 a month for Rapid Response.

The other cost to consider is the data charge that comes with add-ons like remote video surveillance, which will pretty much use as much broadband as any live video transmission feed.

Who exactly is Econet targeting with this service?

In principle, it’s open to anyone in Zimbabwe who wants to get a security system for their home. Which would mean that they are eyeing the 3 million households in Zimbabwe or more specifically anyone who feels that the system reduces the risk of burglary, intrusion, threats of fire or every other domestic disturbance.

That market has been growing and according to media reports, over the past three years, there has been an upsurge in criminal activity related to armed robbery and unlawful entry, all of which is a reflection of shifting economic circumstances.

However, not everyone exposed to this will sign up straight away. There are some important factors that carve out the actual market for Econet Connected Home. Even with a strong brand as the most popular mobile operator it comes down to the cost of Connected Home and the varying priority placed on home security – both of which make it less of a mass market product than other Econet services.

The launch itself was held at Borrowdale Brooke Golf Club located, ironically, in a gated community. Borrowdale Brooke is one of Harare’s if not Zimbabwe’s most affluent suburbs, which is enough of a statement on the type of market that is expected to snap up Connected Home.

As with all new products, though, the real proof will lie in the sign-ups, something that always separates a good service from a bad one, no matter how smart or secure it is.

Here are some pictures from the launch