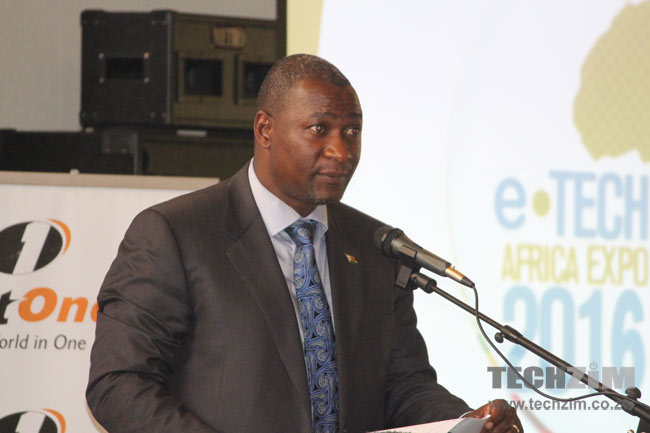 Supa Mandiwanzira, the Minister of ICT

At the recently ended 2016 edition of Zimbabwe’s e-Tech Africa Expo, the Minister of ICT, Postal and Courier Services, Supa Mandiwanzira announced government’s commitment to the development of local platforms and apps through a multi-million dollar investment financed by local operators.

This is being facilitated by the Universal Services Fund (USF) which is administered by the local telecommunications regulator, POTRAZ. The USF was set up as a pool of resources aimed at financing the development of telecoms infrastructure in areas that are generally neglected by licensed operators because of viability concerns.

It typically consists of 1.5% of telecoms operators’ revenues, a contribution that was raised in January this year from a previous 0.5% mandatory contribution.

According to Minister Mandiwanzira, this 1% increase was meant to raise funds which would enable the creation of local apps that can compete with popular instant messaging platforms like WhatsApp and Viber which have affected operators’ revenues significantly.

The Zimbabwean government hopes to raise between $20 and $25 million through the USF over the next 24 months with two-thirds of that being reserved for this local app development drive.

A welcomed development, but….

At a glance, there are a lot of reasons why this is exciting. This is a clear commitment towards technology development and the fostering of local solutions, something that has a whiff of State sponsored venture capitalism and angel investment.

There is some sort of acknowledgement that tech services and applications have the potential to generate revenue for the economy, and it’s something that hadn’t been annunciated, let alone brought into effect by any specific drive.

In Zimbabwe, both technology entrepreneurship and app development are still largely viewed as a must-have accessory in the home that can change how we live, but are only coveted from a distance and never pursued intently. So a promise to pour millions into these areas over the next two years deserves some applause.

While the positives are a no-brainer, there are still concerns that linger around this multi-million dollar tech investment dream and like everyone who’s seen and heard how politics and promises of investment in any sector work, I have my doubts.

Why the skepticism when it’s such an awesome thing? Firstly, there is the aspect of a failed implementation and a lack of transparency in the past.

Prior to the Minister announcement, there have been references to the availability of funds for local technology development and app creation, facilitated in part by the USF.

At the 2015 edition of the Broadband Forum, this same issue was publicly queried by some tech startup entrepreneurs who have claimed that the fund has been largely focused on other projects that have included passive infrastructure rollout and computerisation. There’s nothing wrong with that focus, it’s just startups and local tech innovations weren’t part of the fund’s engagement.

To the best of my knowledge, there haven’t been any startups or locally developed platforms that have benefited from this fund and there was never any clarification on how much of the fund had been reserved for local innovation in the first place.

This lack of information on tech startup investment dovetails with the queries on the USF’s  transparency and accountability that were raised by the fund’s largest contributor, Econet Wireless.

According to a lawsuit filed against POTRAZ by Econet, the details around USF and how it has been used so far are yet to be shared and there is no clarity on how big a pot the fund is in the first place.

Such murkiness will hopefully be dispelled, but until that happens I find it hard to take any statement made around it and tech entrepreneurship at face value.

The other question that follows this multi-million dollar focus on local tech relates to the absence of structures to support tech innovation and entrepreneurship.

As noble as an investment in tech entrepreneurship sounds, it is fraught with a host of challenges that include the capacity of the would-be tech entrepreneurs, a limited  appreciation by both the government and the recipients of funds of the dynamics of launching a tech company and the sort of support needed in an environment like Zimbabwe.

Will the government be willing to back apps that are yet to clearly define their business model and are facing enormous challenges from existing market leaders and household name tech brands? Will there be a system for monitoring the progress made after funds are disbursed?

Hopefully, before would be entrepreneurs line up to get State investment in their ideas, the government will have familiarised itself with the dynamics at hand. The last thing the country and the tech ecosystem needs is another round of aspiring entrepreneurs raiding a fund only to default on loans while creating a bad name for youth empowerment.

There are all these pieces to the puzzle that need to be put together before we can dream of outpacing services like WhatsApp and Skype. If this happens then there is a chance that this might work, but until then, I have my doubts.