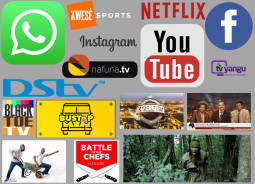 A week ago we started off on a new approach to in-depth content with a series called “Beneath the Surface” which is meant to provide us with an opportunity to plunge into a further understanding of certain topics in Zimbabwe’s (and the region’s) tech space.

So far, our first feature, The Internet video Economy in Zimbabwe; has led us to a host of discoveries on the makeup of the online visual entertainment sector and has helped us get a better feel of who is doing what in the space.

In this article, we will as promised, outline the questions we hope to answer on the current topic in this week’s investigations. We will also share a summary of the findings from the previous week as a way of keeping you updated on our discoveries so far.

We are excited to be unboxing all this information as we go, and are extremely grateful for the feedback we have been receiving which has helped craft an even clearer picture of what lies in this ecosystem.

Here are our findings so far.

There’s comedy and really not much else

The majority of content creators that are eyeing growth through internet distribution are comedians. This leaves a variety of unexplored genres and themes which could provide an opportunity for other forms of entertainment to capture the attention of viewers.

Some shows like Makeup naLynetty, The Teapot Zimbabwe and, Zimpraise ExtolTV which have created some traction with content focused on different themes and genres all provide a glimpse of what can be accomplished if the same dedication is extended to another form altogether. These efforts, however, still leave a variety of themes such as sports, food, cars and automation, music  entertainment, business and even technology unexplored.

So far we have come across less than 30 creators, aggregators and production people that are looking at the internet as a unique opportunity. Our list of video creators had just 7 and even amoung these only 3 are doing it commercially. It suggests a limited exploration of this opportunity or even a lack of awareness of it.

Based on aggregate views on facebook and YouTube for the past 3 months, Baba Tencen of the Kuripwa Kugara fame has managed to outpace the other prominent internet video sensations like P.O Box, Bustop TV, and Comic Pastor. Ofcourse this is not to say he makes more.

This was evident for the leading creators like Baba Tencen and P.O. Box. This was a bit of a surprise as we naturally assumed the Facebook bundles offered by mobile operators plus Facebook’s generous 3-second view-counting method meant its views would be far more than YouTube’s. So far we’re thinking this is because of a huge diaspora audience for these videos. In the UK, US and South Africa data is not expensive as Zimbabwe and Facebook is not bundled there.
[visualizer id=”1806045″]

The revenue lies in Branded Entertainment

The most visible content creators that have established a revenue model are achieving this through sponsored content. Producers like P.O. Box, Bustop are very deliberate with this approach, attracting various brands in different sectors like retail banking, telecoms and even tech startups. Large brands like Old Mutual, Steward Bank and Telecel.

Zimbabweans are still the only target market

None of the content has a regional or international feel, something that is evident from the use of vernacular language as well as the absence of subtitles to bring in a wider audience. As such, the only targeted viewers are  Zimbabweans in the country and diaspora.

We’re exploring how much of a missed opportunity this is if any. We’re also wondering if the vernacular heavy comedians will just be as good delivering their content in other languages. Anne Kansiime and Nollywood’s success delivering content in English may mean there won’t be any problem at all

The short film sector is not seeing the opportunity?

Despite the advent of channels like Facebook and even WhatsApp, the local short film production circuit is not extensively exploring the opportunity of the internet and social media. We are yet to dig deeper into the cause for this, but early indications suggest that work in this space which is largely funded pre-production (largely by the NGO community) is not motivated to explore the commercial angle which touches on extensive online promotion.

No aggregators own their platforms

All the aggregators use existing platforms such as YouTube and Facebook to host their content. Ofcourse this means they have to be subject to the terms – most importantly the business models – of these platforms. For example, the aggregators can’t put up a paywall on YouTube or Facebook and have to rely on the platform’s advertising business model.

What lies ahead? – Questions for this week

This week we’re building on our findings to answer:

6 thoughts on “Baba Tencen is the most popular Zimbabwean internet video creator, and more interesting facts.”