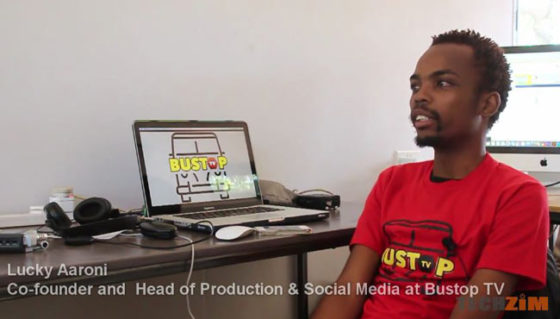 The name Bustop TV is still new to a lot of Zimbabweans but the faces and act behind it are very familiar. Despite its new name most people will instantly recognise this comedy troupe comprising of Gonyeti, Maggie and Comic Pastor.

This internet video startup which was formerly known as P.O. Box recently rebranded to Bustop TV in order to avoid confusion with P.O Box Reloaded, the breakaway comedy skit production team led by the also recognisable Bhutisi and Kedha.

There are, however, other people who play key roles behind the scenes for these internet video outfits. For our Beneath the Surface feature, we sat down with one such guy, Lucky Aaroni. Along with Bhutisi and Kedha, he was the co-founder of the original P.O Box TV and now works as the head of production and social media for Bustop TV which he also co-founded.

In this interview, he shared some insights on the work that goes into the production of each skit, as well as perspectives on internet video creation including issues that this burgeoning industry is dealing with like freebooting, breaking the language barrier as well as the nuances around Facebook video.