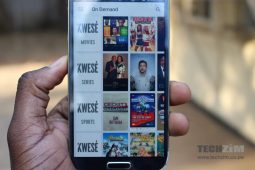 Under this partnership, the NBA will show live games and other NBA programs on Econet’s pay TV service Kwesé TV as well as on the Internet and its mobile platforms.

As such Econet becomes the NBA’s sub-Saharan Africa official broadcaster. It will be able to offer viewers over 500 games which will also include the WNBA games, the NBA playoffs, and the finals.

The arrangement between the NBA and Econet also marks the end of NBA’s relationship with its current broadcast partner SuperSport which is part of Naspers’ MultiChoice. The contract between Supersport and the NBA is set to expire at the end of the current NBA season.

According to ESPN, Amadou Gallo Fall who is the NBA vice president and managing director for Africa has called the deal with Econet the largest partnership in the history of NBA in Africa.

Fall has also expressed the NBA ‘s desire to tap into the opportunity presented by mobile device access while Adam Silver the NBA’s commisioner has called Econet the ideal partner for their plans to extend their reach across Africa.

With DStv often cited as being an expensive pay TV option, the NBA’s partnership with Supersport meant that it could only deliver its content to a limited demographic across Africa.

The deal with a broadcaster like Econet targeting mobile TV opens this content up to a wider potential market, something that ties in with its growth prospects in an untapped market.

For Econet Media, this is a significant win. Securing content for the NBA adds more clout to its Kwesé TV service which is set for an official launch before August 2016 and adds another shade of content diversity while helping shape it as a leader in sports entertainment.

So far the service has also secured rights to broadcast the hugely popular English Premier League. Though this deal wasn’t exclusive as is the case with the NBA, it has helped position Kwesé TV as a provider of content that can rival the MultiChoice monopoly.

Econet Media and every other player interested in making a splash in the African Pay TV space has been in the race to secure various forms of content something which has been one of the determinants of success, especially in the face of well-funded competition like MultiChoice.

If Econet continues to lock deals with different content providers by either waving its cheque book or riding on its value proposition of mobile access across Sub-Saharan access it just might give MultiChoice a run for its money.