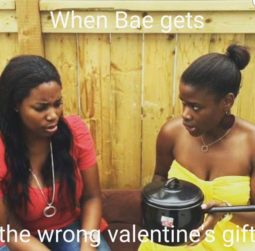 Our ongoing Beneath the Surface look at Zimbabwe’s internet video economy has helped us uncover some remarkable trends on online video creation dynamics.

It’s also helped us focus on content producers who have dedicated a lot of time and effort into the consistent development and distribution of video for the internet. This includes Diaspora based Zimbabweans who are actively engaged in content creation for global Zimbabwean community.

Wershuta (pronounced as We Are Shuta) is one production team that falls into that category. the Canadian-based Zimbabwean duo of has been churning out comedic skits on YouTube that have a Zimbabwean focus for more than a year and in the process have established a following that has been growing consistently.

We recently had a quick Q & A with them and they outlined the work they have done and how far they want to go with internet video productions.

How long have you been working on the Shuta videos?

We have been recording videos under Shuta since December of 2014.

Did you think this would be a long-term gig?

We truly didn’t plan that far ahead. When we started on KTV (Keda TV of the Zvirikufaya fame)  it was specifically for the dance challenge that was happening at the time. We were considering doing a one-time appearance, however, the response was so appreciative that we chose to continue posting regular videos.  In 2015 August, we started our YouTube channel as well as our website as we had received countless support from family and friends to branch out on our own. Now our goals are long term. We hope to one day have some sort of TV talk show catered to Zimbabweans.

How many people did you start off with and how many are involved in the production right now?

We started of with Otni (Muera Shumba) and Ruvimbo (Muera Beta) on the forefront and then our manager Mory Savane behind the scenes. Our team is pretty small as we like to keep our circle small and so it’s still comprised of four individuals who discuss anything Shuta constantly. Only one person has been added to the Shuta group since it began. On occasion, we have friends feature in our videos.

Did you have any video production experience or this was the first time?

Shuta had no video production skills when we started. We honed in on our editing skills as we went along, through research and watching other YouTubers.

Have you had to pick up any additional skills to improve the quality and delivery of your content?

There has been no official training on the stuff we do; however the job we have (going around doing African dance presentations in and around Canada) has helped us in our videos. It has taught us that not everyone will like what we deliver and that is fine. Also, we know we need to enunciate ourselves eloquently in our videos because of this.

Is there any significant investment in equipment for filming?

Yes, there has been some investment in video equipment. Our manager thought it a great idea to invest in a good Canon camera and tripod for our video graphing and then we have invested in video editing applications as well.

You promote some concerts and shows, something that appears to be a possible route for monetization. Is this the case? Have you started monetized your efforts?

Yes, when we promote shows for people we charge a fee. Once we realized how big our brand was becoming, we figured it was about time to monetize the Shuta name.

How successful has that been in terms of revenue generated and clients attracted?

This is pretty successful for our United Kingdom clients. We looked at out worldwide ratings and noticed that a large portion of our viewers are based in the UK and so we tend to advertise for that area. Our future goals are to advertise for companies and organizations in Zimbabwe.

How much of your viewership is Diaspora based?

85% of our viewers are Diaspora based, with the UK and North America being the highest. We do have people all over the world and sometimes we get a message from somebody in Dubai or Haiti which proves that Zimbabweans are now worldwide. The rest of the views are in Africa, mostly southern parts of the continent.

Is there any scope to introduce subtitles as a way of drawing in non-Shona speakers and grow your audience?

The introduction of subtitles has been an ongoing issue for us. We have tried to put subtitles in our videos since we realized that a lot of our viewers were not just Zimbabwean. However, the editing applications we use do not give us this option. So, for now, we are unable to do so and will look into it once again when we find better editing applications and invest in them. We do try to speak less Shona now in order to cater for the non shona speaking subscribers we have.

We do generate YouTube Ad revenue, however this tends to be more difficult as people have to actually watch the adds from beginning to end for us to actually get anything from them.

How much would it cost to get an advert placed in your content or to have a mention?

A one-time mention in a Shuta video costs US$78 ($100 Canadian) and a few mentions in back to back videos will set you back US$195 ($250 Canadian). To have your website tagged on our videos on an ongoing basis (meaning a banner comes up in the corner of our videos mentioning the website or brand, and information put in our description box) is US$390 ($500 Canadian) that can be paid over the course of the contract.  All our adds that we do for people show up on our website as well as on our other forms of social media for no extra cost.

Are there any other routes being explored for monetization?

We have not been looking into other routes for making money just as yet, as we are waiting to have more subscribers and then we will try build relationships with companies in Zimbabwe so we can advertise for them online.

Are there any plans for crossover to a linear TV/traditional TV show centred around the skits?

As mentioned (above), our end goal is to have a TV show for Zimbabweans that is light-hearted and fun, yet educational and so we do aim to be on TV. Of course, people enjoy our skits and we would not stop those completely, however they would not be our main focus once we made it onto a bigger platform. They would still show on our YouTube channel.