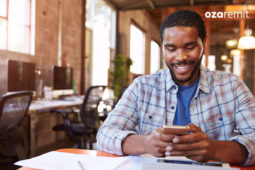 Remittance services have been in the spotlight lately because of their core value proposition – facilitating foreign currency inflows which are a major pillar of support for a foreign-investment-starved Zimbabwean economy.

Some of the players in remittances, however, explore other alternatives for easing the need for finances in home countries which is what a startup called Ozaremit is out to do with its platform.

Started in the United Kingdom by two African tech entrepreneurs,  Ibrahima Soumano (a Guinean) and Takwana Tyaranini (a Zimbabwean) Ozaremit lets users buy airtime credit for recipients in 35 different African countries. Transfers are made instantly and directly to the recipient’s mobile phone and there is no need for any follow-up activation.

Ozaremit is still in its early stages (it’s been active for about 2 months) and according to the team, they have registered close to 1,000 users. Based on the rate of signups they anticipate this number to double in the next few weeks after they initiate an aggressive marketing strategy.

Most users of remittance services will probably recognise how Ozaremit is the same sort of service that’s offered by other multi-service remittance startups like WorldRemit and Afrocoin as one of their core offerings.

Airtime remittances are also the primary service offered by providers like Azimo, Prepaid Union, Topuptosend, Orange Topup, and Digicalling Cards some of which also cater for the African market.

It’s clearly a very competitive market and it will take a lot more than just a commitment to service quality to make an impression.

Which is why the Ozaremit team has made plans to activate partnerships with retailers and small shops to allow the sending of instant mobile credit from fixed terminals and merchant Point of Sale devices.

At a glance, this seems like another minor iteration that caters for the user who can’t access the internet.

However, with the route that Ozaremit wants to take to also offer money remittances and bill payments in its next version of the platform, this could help the service create a substantial presence through the establishment an agent network for remittances.