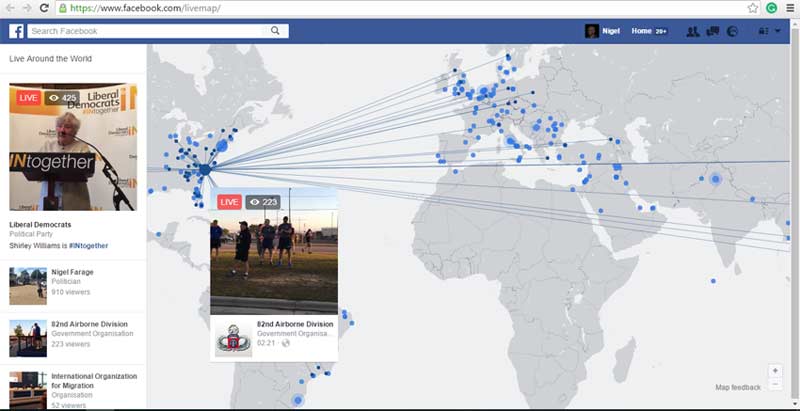 Facebook is constantly trying to improve what it offers its users but from all the changes it has made over the past few years one thing is very clear in its strategy- video content is a big deal.

After opening up its Facebook Live video streaming feature to even more users in 60 countries outside the United States last month, it’s now added an interactive map to the Live service.

With the map, users have a real-time view of the live streams that can be watched.

The service is only available for desktop users and while Facebook hasn’t opened up actual live streaming to every country on the planet (Zimbabwe included) every user can check up on the most popular streams and tune into these live broadcasts.

The live interactive map not only makes it easy for Facebook users to trial the most trending broadcasts, but it also acts like a promotion for Facebook’s live broadcast service before it is opened up to more territories.

It also highlights the competition that is emerging in the mobile broadcast video space. Facebook is trying to differentiate itself in a league that includes Twitter’s Periscope as well as Meerkat – which was, as recently as last year, a leader in the mobile live broadcast space but has now been reportedly forced to pivot as competition heats up.

Live broadcast has attracted a lot of attention because of the way it is primed to disrupt the traditional model of live video delivery by giving every smartphone user an easily accessible tool for real-time sharing that just happens to offer amazing opportunities for getting feedback.

While it hasn’t become as ubiquitous as features like video sharing it is a clear representation of how future broadcasts are going to be handled, highlighting another wave of disruption that could hit slow-to-adapt media organisations.

A reality that’s still too far off for Zimbabwe?

Locally, mobile live broadcast services like Facebook’s Live streaming or Periscope are actually not huge attention grabbers right now. Anything that mixes up the words “live” and “online” sounds a bit like something that’s still far away.

After all, we are still tussling with our internet providers and more importantly the mobile network operators to review the cost of broadband and to look beyond just WhatsApp and Facebook bundles as sources of internet access.

However, it’s not entirely a lost cause. In the past 18 months, market forces like competition and shifting internet usage patterns have prompted internet providers to lower prices and offer increasingly cheaper packages.

With any luck, the introduction of other value added services like live broadcast for already popular platforms like Facebook will trigger massive adoption and increase the business case for better data packages.