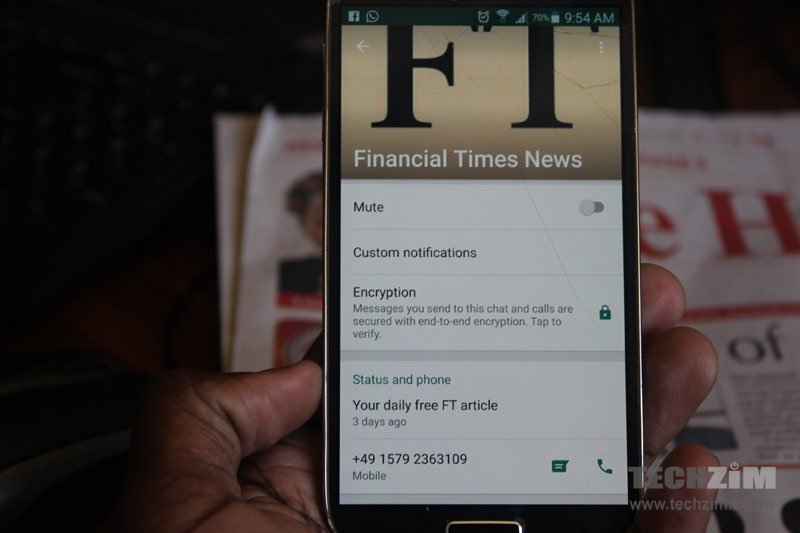 Earlier this week UK-based publisher and media company the Financial Times (FT), announced the introduction of a WhatsApp broadcast service which will be used to distribute content to its readers.

To sign up a user needs to create a new contact for the number +49 1579 2363109 and then send this contact the message “Start” via WhatsApp. If you want to unsubscribe you send the word “Stop” to the same number.

The service is being provided by a company called WhatsBroadcast which offers a newsletter and broadcast solution for WhatsApp lists.

The service is open to both subscribed and non-subscribed readers and will provide anyone who signs up for it just one story from the publication every day.

According to the announcement from the Financial Times, this will be either a big story or a major analysis. There are also plans to possibly introduce separate broadcast lists for specific topics.

Following the New York Times’ use of WhatsApp for updates on the Pope’s visit to the USA last year, the Financial Times joins other major media companies like BBC and Vogue that are distributing content through WhatsApp. This could influence other media companies to explore the same strategy as the mobile content delivery takes centre stage.

Traditional content distribution channels are being continuously upended by changes in digital media and beyond the disruption that happened to print publications, the standard web platform delivery is also being challenged by shifting patterns that factor in social media’s rise.

This has happened with Facebook publishing and it’s now moving to Instant messaging (IM) platforms.

The Financial Times’ motives are likely to have been influenced not only by this but also by WhatsApp’s immense popularity.

In Zimbabwe, WhatsApp has become the most popular web-based service accounting for a third of all broadband traffic thanks to the use of WhatsApp bundles  – a broadband product from mobile operators that offers unlimited access to the IM service for $3 a month.

Options for news delivery via WhatsApp will likely be the next stage in content delivery as the local market continues to rely on WhatsApp for more than just chat.

Update – in an earlier version of this article, we had referred to New York Times and the Financial Times as the first major media companies to use WhatsApp for content distribution. We have since updated this to include companies like BBC, Sky Sports and Vogue that are also using this function.