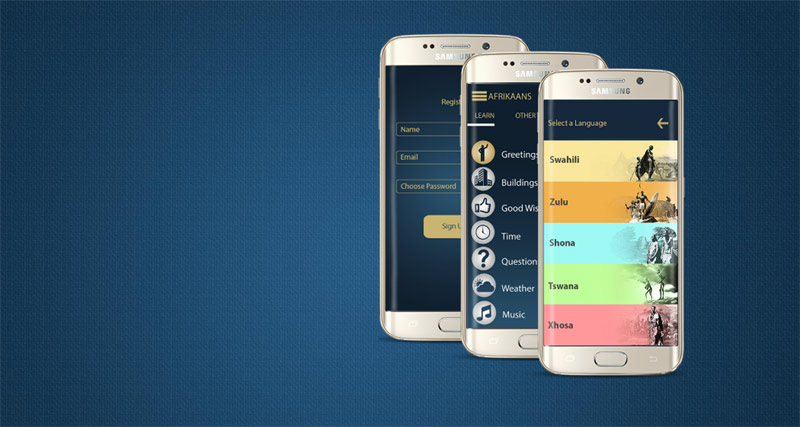 Pretoria-based app developer Greg Kawere, a Zimbabwean, has come up with an app that dubs itself a premier tool for learning African languages.

Zivo wants to teach anyone an African language. What’s more, the startup is part of a much wider (and grander) effort to use technology as a tool for cultural preservation (language, knowledge, etc) on the African continent.

The idea is that the best-known language-learning apps in the world only teach you French, German, English, Chinese. Not KiSwahili or Shona.

That’s where Kawere and his team come in, trying to create an uber-cool and uber-useful tool to learn languages that you will not find on Rosetta Stone or Duolingo. So think of Zivo as the local Duolingo. Indeed, the world’s most popular language-learning tool (Duolingo has more than 40 million users worldwide) was clearly the biggest influence for the team behind Zivo as they made their app:

The UI was heavily modelled after Duolingo’s
The lessons have been structured into modules
Each module, in turn, contains lessons

So my impressions with the app divide neatly into two columns of what I liked, and what I did not fancy too much.

Zivo, like Duolingo, will dictate which module the user takes, and they follow a chronological format: in order to learn Module 2, Module 1 (the first one) has to be completed first.

Completing each module is how the user “unlocks” the one that comes after it, and that strict, one-by-one method has to be painstakingly followed throughout each module.

I was not graded in any of the tests I took on the app, or given any feedback. The sense of accomplishment that can be a user’s after receiving visual feedback on their performance and progress is missed. Such a sense greatly helps to keep learners using the tool — and never drift off from the app.

The Zivo facility also comes only in app form, without an online or offline desktop version. This is unlike bigger and more established language-learning facilities where desktop versions allow the facility to add features that are difficult to implement or offer crappy UX in mobile form.

This counts as a potentially missed opportunity by Zivo, although later versions of the app might broaden beyond mobile, given the creators’ wider aims of cultural preservation.

4. No variety of learning aids

The app does not offer much more than text only, and flashcard learning: there is no audio learning (listening to, or reading out phrases), no video learning and no visual learning (e.g. matching images/pictures to names of objects represented) Duolingo, by contrast, derives its immense popularity from the fact that the learning environment is packed with.

The user interface is aesthetically pleasing and neatly designed, albeit with visible inspiration from Duolingo. This is an app with obvious graphical and visual appeal, with all categories, modules, and lessons neatly ordered and easy to navigate through.

Zivo offers Shona, Afrikaans, Zulu, Swahili, Setswana, and Xhosa. That covers the majority of the most spoken African languages in the region.

The presence of Afrikaans amongst a mostly Bantu cast of languages is also refreshing, recognizing not only what is a critical portion of South Africa and its culture, but also equipping non-Boer learners with skills they can use to integrate within Afrikaans-speaking regions of South Africa (the “Silicon Valley of the region” also happens to be in one such region, the Cape Town area.)