NetOne, the government owned mobile operator, made a loss of about $3 million dollars in the 2015 financial year, the company’s acting chief executive officer Brian Mutandiro has said. Mutandiro provided the information to parliamentarians who toured the company last week. The 2015 loss is a decline from a $5 million annual profit made in 2014.

The acting CEO says the loss is the results of a poor business model that saw them bleeding money in promotions it held during the year. Such promos as the Dollar a Day promo which was drastically adjusted in March to take away most of the free benefits it provided to consumers.

NetOne has over the years gained subscriber marketshare at the expense of Econet and Telecel on the back of the popular Dollar a Day promos that have run in one form or the other since 2011. Between 2012 and 2015, NetOne gained a total of 3.7M subscribers while Econet just gained 1.2M and Telecel 2M.

See the graph below: 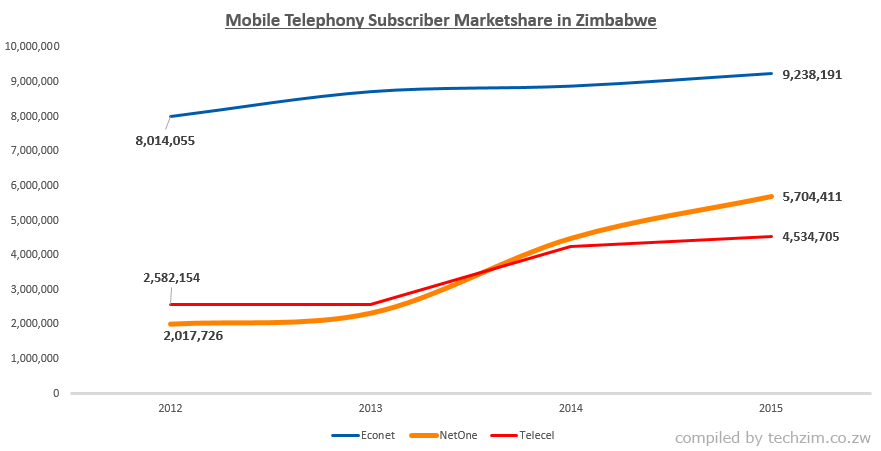 Explaining what they strategy is onwards Mutandiro said they have already started stop the poorly modelled promotions and are looking to increase utilisation of infrastructure already deployed so they can sweat what has already been invested.

As you may know, the NetOne board suspended the company’s CEO Reward Kangai as allegations against him of corruption and mismanagement are being investigated. Corruption aside, the Kangai led management is blamed for failing to put in place a profitable business model for the company.

Likely though, the truth is that NetOne never really won over the subscribers from the other mobile operators. The Dollar a Day sim may just have been an extra sim with subscribers remaining loyal to their primary mobile provider. Especially for such things as mobile money, stable mobile internet, more coverage and call stability which NetOne could not provide.

3 thoughts on “NetOne made a $3 million loss in 2015. Gaining subscribers but losing money”