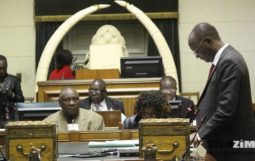 The House of Assembly in Nigeria will this week officially adopt electronic voting, according to reports coming out of the West African country.

The move towards an e-parliament, as it is being called, will be supported by internet and intranet access and comes after months of lobbying from various stakeholders. Electronic voting, in which records on all the voting that takes place on motions is preserved, allows constituents/ citizens to know their positions their elected representatives take on key issues.

“At the moment, voting in the House is done via a primitive “all in support say aye, all who are against, say nay” paradigm, which is as opaque as opaque gets, and is generally a very inefficient way to do things”

In developed countries, especially in the West, e-voting is commonplace so much as to be easily taken for granted, and without it, basic democratic processes in these countries would be unthinkable.

Zimbabwe still does it old school

Our parliament is still stuck in the old school system that Nigeria is migrating away from. The opaque, inefficient, laborious process, such as the one decried in the Nigerian example above, shows no sign being done away with, as no-one in ‘the august house,’ to the best of our knowledge, has sponsored a motion to modernize – although sections of the media and civic society have mulled the options of an electronic national poll.

Two years ago, Namibia chose its president and parliament in what was Africa’s first electronic poll, although the precedent has largely not been followed up elsewhere on the 54-country continent.

I believe that given the history of general elections in Zimbabwe, especially the 2002 and 2008 polls that are generally acknowledged to have been manipulated, it will be extremely difficult to convince the Zimbabwean government to go digital. But parliament is a different game altogether, and imposes less political risk on the government and is thus something they would be ready to seriously consider.

In fact, far from imposing costs, e-voting for parliament definitely cuts costs, improves efficiency and clears a lot of physical clutter and backlog, in addition of course to the ease and convince of voting electronically. And most importantly, it’s a giant step towards deepening and growing Zimbabwean democracy, by virtue of the sheer accountability imposed on elected legislators when their voting patterns become public knowledge.