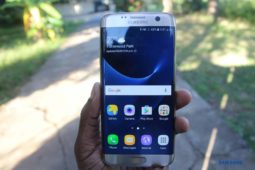 Samsung Mobile has always been very clear about wanting to be the leading smartphone manufacturer in the world. You only have to look at its latest mobile devices to understand how serious these intentions are.

It’s also the same thought that you’ll entertain when you pick up the Samsung Galaxy S7 Edge. This is the South Korean mobile giant’s latest flagship device which was launched in February 2016 and has already set the bar for Android mobile technology.

For the most part, the Galaxy S7 Edge builds on the great reputation that was created by its predecessor the Galaxy S6 Edge. This was Samsung’s 2015 flagship and it established Samsung as a leader in mobile design.

The Galaxy S7 Edge and its slightly smaller sibling the Galaxy S7 bring improvements to the areas that users and critics weren’t too excited about last year, and both devices capture all this by being an ultimate device that has a lot to offer. 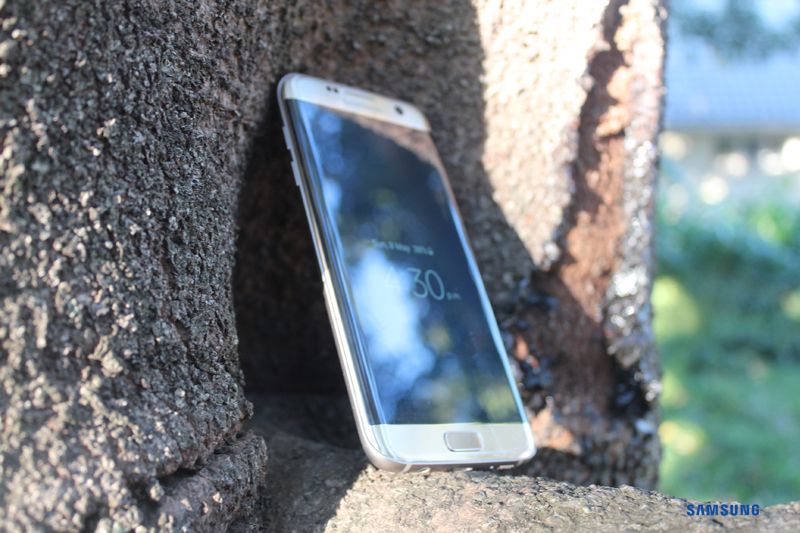 Just like the flagship that came before it there’s a lot to fall in love at first sight with this latest Galaxy device.

The S7 Edge has maintained the now familiar curved design to deliver the same wrap around glass edges that give it its name and distinction among other smartphones.

The device’s rear has also been curved slightly into some sort of a unibody metal case, which solves some concerns from the S6 Edge’s flat rear that made picking the phone up from a flat surface a bit difficult and made the edges feel sharp-edged.

These curves also help in the overall feel of the S7 Edge in the palm and make it fit perfectly into an average adult sized hand. 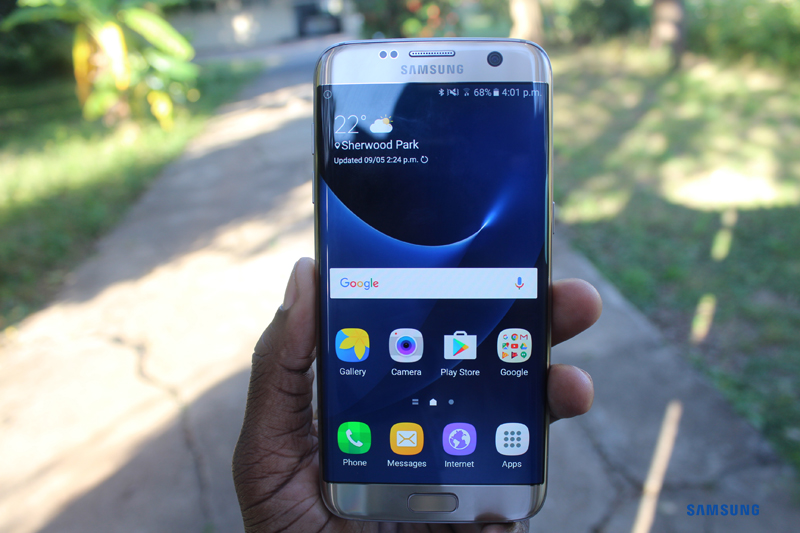 Also evident at the back is the redesign and limit of the camera protrusion which has felt awkward for Samsung’s high-powered shooters in previous phones that seemed to hoist up the device when it was placed on a flat surface. 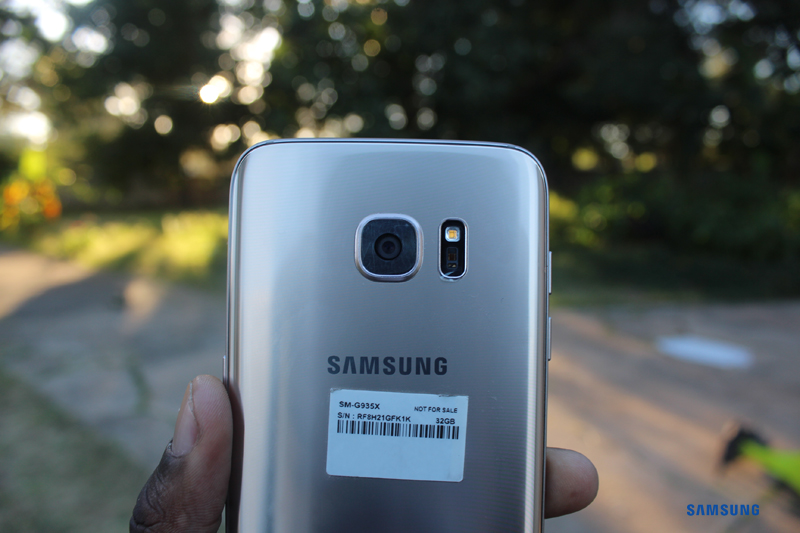 An important change, one which some would call the most important, is how the Galaxy S7 Edge is bigger than that the S6 Edge. This is best displayed (no pun) by its screen. The S7 Edge sports a very generous 5.5 inch AMOLED display with Quad HD resolution.

These acres of screen offer a crisp display and are great for gaming, scrolling through a document or a picture gallery as well as mobile video which we’ve now gotten used to through a near obsession with videos on social media. 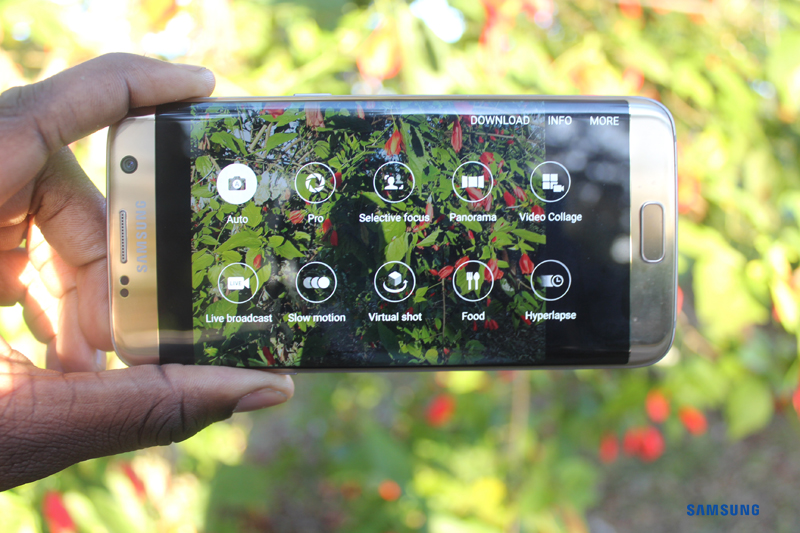 There’s a full metallic body which cannot be opened up for battery removal. Samsung likely stuck with this because it’s what now defines high-end design from the manufacturer. 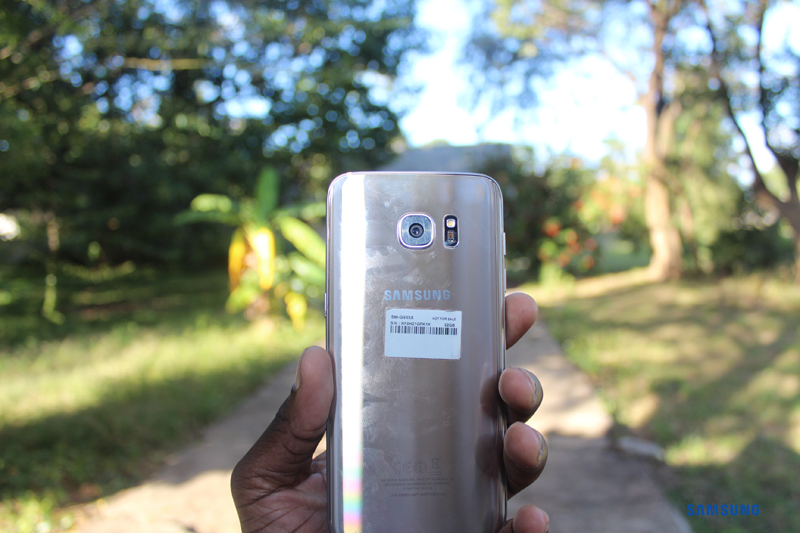 Besides the threat of fingerprint smudges, the glass and metallic look is something that is easy to embrace as a compliment to the look of a premier device which would be compromised by a plastic finish.

The Galaxy S7 Edge’s SIM tray is lodged at the top of the device and it now accommodates a slot for the microSD card, giving room for the expandable storage fix that Samsung had dropped last year. 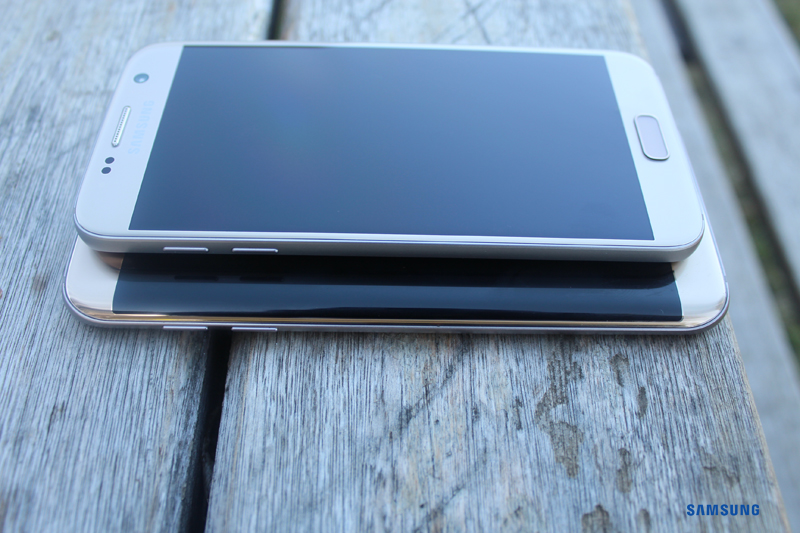 The volume and power switches maintain their familiar Samsung home on either side of the device while the bottom of the phone hosts the USB slot, the headphone jack and the single speaker which is still placed awkwardly and doesn’t live up to the rest of this awesome device.

Something to also smile about is the water and dust resistance which means you can take a call in the shower or in the rain. 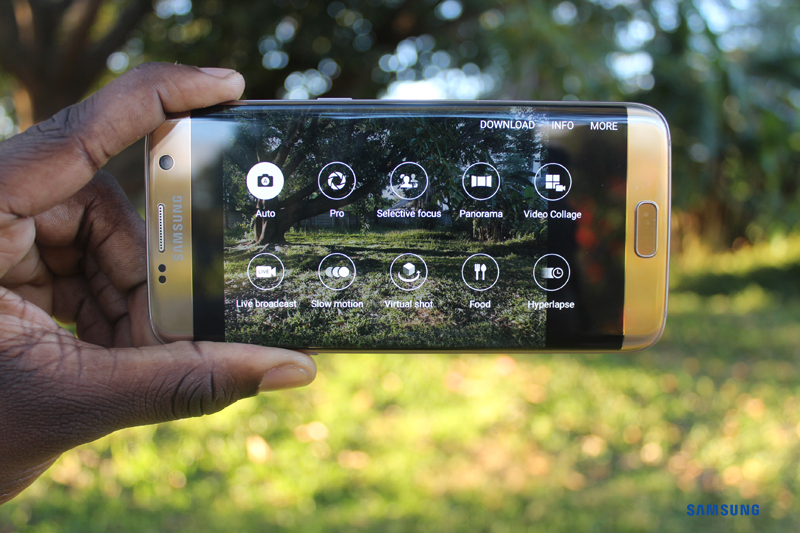 Samsung knows how to make great cameras for its phones and the Galaxy S7 Edge looks like it’s been sent to remind you if you’ve somehow forgotten that.

Samsung placed a 12 MP rear camera on the S7 Edge which is a lower mega pixel count than the S6’s 16MP total but comes with changes meant to accommodate contrast and balance better than other Samsung devices.

The snapper uses dual pixel technology and a bigger aperture which has increased the light capture. The device also comes with a 5 MP front camera.

The result of these changes is a delivery of sharp images that capture a lot of detail even in low light situations.

The S7 Edge’s Quad HD display which is covered by Corning Gorilla Glass 4 cover has a 1440 x 2560 pixels resolution and it’s the one thing that will be noticeable every time you tap the screen with a presentation of beautiful visuals that are difficult to ignore. 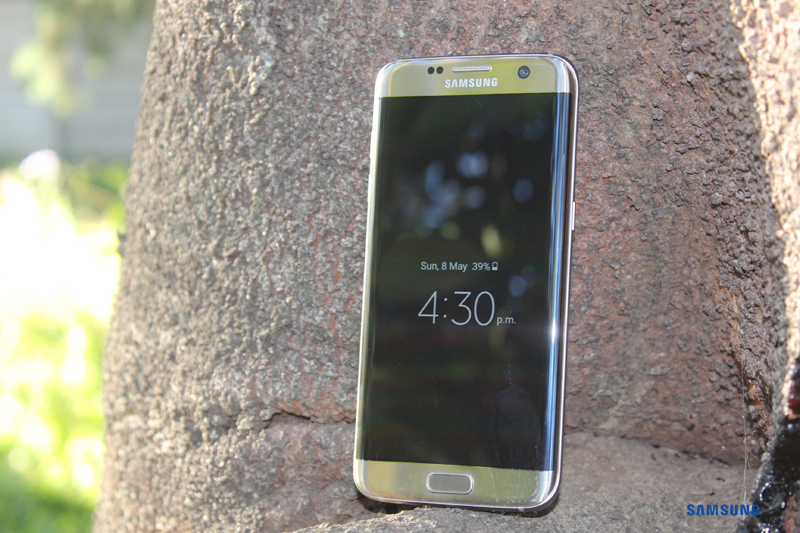 One other screen feature that’s part of the S7 Edge generation is the Always-On display which will constantly display basic info on the screen like date and time without the need to tap it and use even more battery in the process.

The Edge Screen and under the hood 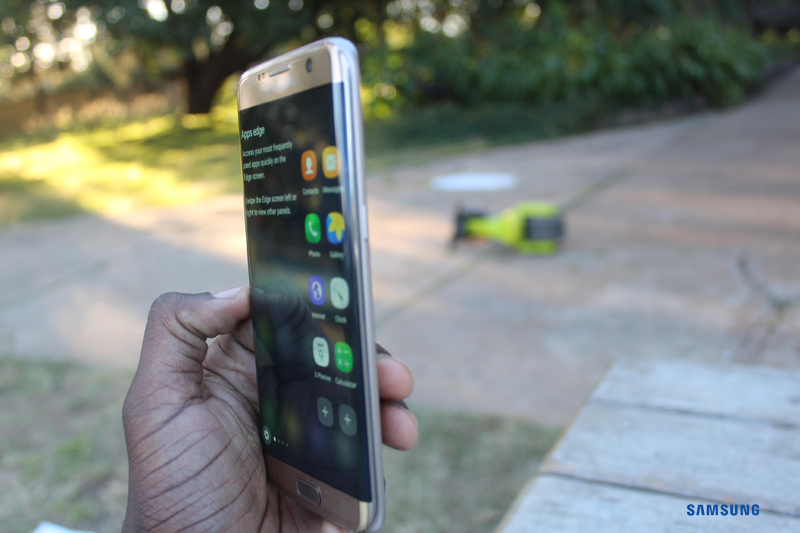 As an Android device, the Galaxy S7 Edge runs version 6.0 aka Marshmallow which is complemented by an improved version of the TouchWiz skin.

It is powered by a 1.6 GHz  Octa-Core processor on a Qualcomm Snapdragon 820 chipset. It comes with 4GB of RAM and 32 GB or 64 GB of internal storage which can be boosted to 200 GB by a microSD card. 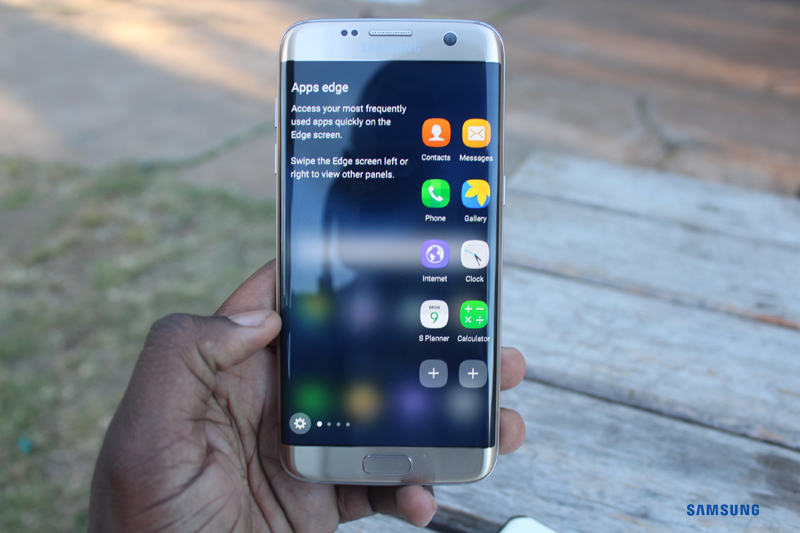 The Galaxy S7 Edge owes part of its individuality to the Edge screen.  First introduced in earlier Samsung devices this feature enables easy access to what you use the most and who you talk to more than anyone else lets you modify the display panels to accommodate not just contacts and apps but functions as well as rearranging the different.

All the work that the S7 Edge does is carried by a 3600 mAh battery. This power pack has proved to be another strong point for the device.

It can easily handle a full day’s service using standard apps like WhatsApp, YouTube, Facebook, voice calling and the occasional game without the need for the replaceable battery that you can’t have anyway since the Edge’s battery is non-removable.

There is the option for wireless charging and the S7 Edge also comes with the Adaptive Fast Charging feature which determines how best to power up the device’s battery in a short space of time. 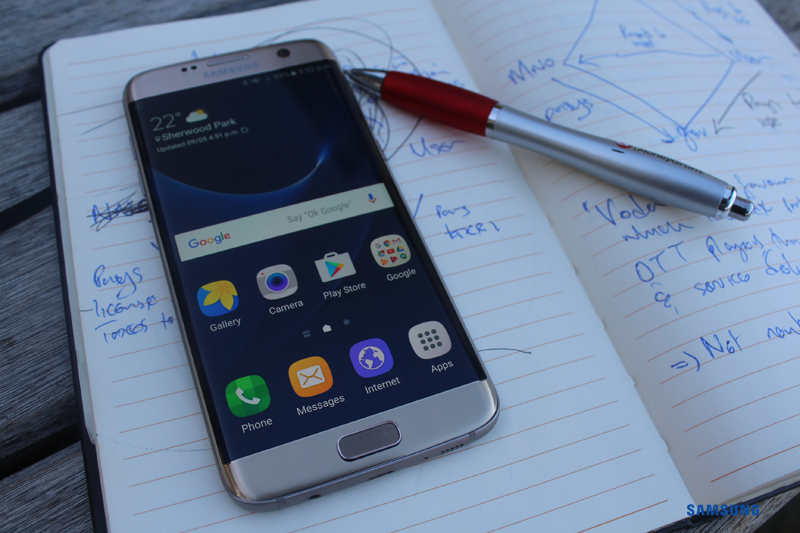 This device is hardly for users on a budget. Selected Zimbabwean listings have placed the Galaxy S7 Edge at four figure prices and you won’t find it for anything less than $1,000 especially from distributors that normally work with Samsung to provide full warranty and support.

Overall, the Galaxy S7 Edge is easily the best Android device on the market. Samsung took the major successes on the S6 Edge and improved on that by making just the right improvements. 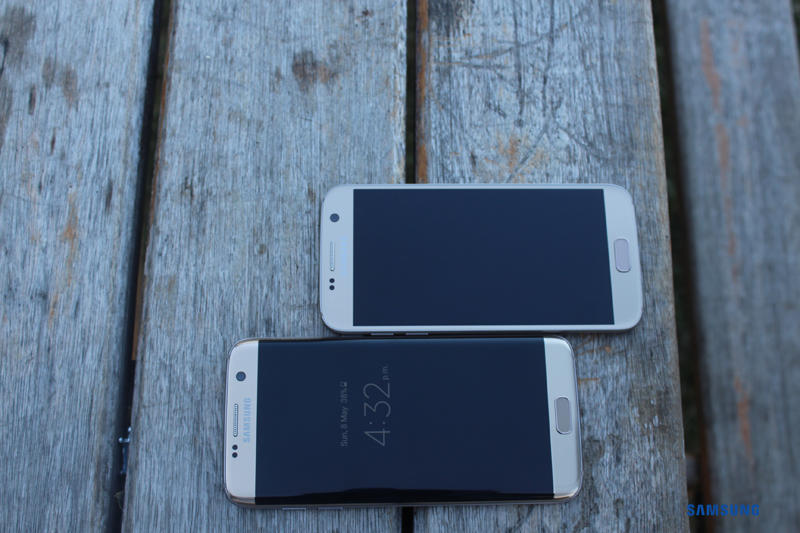 As long as big devices are your thing (you’d have to buy the Galaxy S7 if you want something smaller and just as good) and you are willing to part with the premium price that is attached to a world leader in mobile technology, there really can’t be any other choice.

One thought on “Our review of Samsung’s flagship phone, the Galaxy S7 Edge”