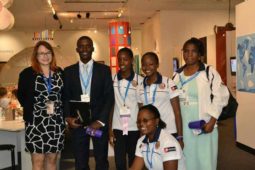 The Zimbabwean team that took part at ISEF 2016

The Intel International Science and Engineering Fair (ISEF) which is held in the United States hardly draws a lot of attention in Zimbabwe despite being a major global event in the Science, Technology, Engineering and Mathematics (STEM) field.

It has been running for 67 years and has been described as the world’s largest international pre-college science competition. The fair draws teams of high school students from over 75 countries and regions who showcase independent research and compete for a host of prizes worth millions of dollars.

This year, for the first time ever, Zimbabwe took part in the fair which was held in Phoenix, Arizona from the 8th to the 13th of May. It was one of four African teams that took part in this year’s edition.

A team of students led by a Zimbabwean scientist, Knowledge Chikundi, represented the country and showcased a non-electric ash powered refrigerator.

This team was selected from last year’s Zimbabwe Schools Science Fair which was a collaborative effort between local scientists who included Chikundi as well as the Ministry of Primary and Secondary Education.

Despite this being a maiden appearance the Zimbabwean team walked away with an accolade. It received the Wolfram Research Award which is one of the special awards presented to honour notable exhibitions.

The victory has earned the Zimbabwean team a lot of praise and it will definitely be a major confidence boost for the national STEM drive that is being encouraged in high schools.