The company initially came into the local spotlight in 2014. Following a deal signed with the leadership at Caps United Football Club, the startup agreed to co-manage and become the main sponsor of the green-clad team that is one of Zimbabwe’s biggest soccer brands.

However, amid reports of corruption by the company’s local partners, the Caps deal collapsed and ZiNG  more or less disappeared back into the woods.

ZiNG are now back in Zimbabwe, as a formidable company that looks like it can power its way into the highly-populated electronic vending space. The people behind ZiNG ZW in its present form are different from the group that got involved with Caps United.

Basically, the company is erecting booths around the country, where they electronically vend electricity, airtime, bill payments, DSTV subscriptions, and other services. They have entered the same voucher vending space populated by the likes of easi and MVendr.

The technology running on the ZiNG platform is made by Blazing Chilli, the same South African company behind the IM that Zimbabweans briefly encountered.

They have erected 40 booths already, mostly in the capital city but a few have been thrown into places like Mutare and Marondera. Each booth, made out of imported material and furnished to give the occupant maximum comfort and protection from bad weather, costs several thousands of dollars.

This underlines just how big of an investment ZiNG are pouring in. 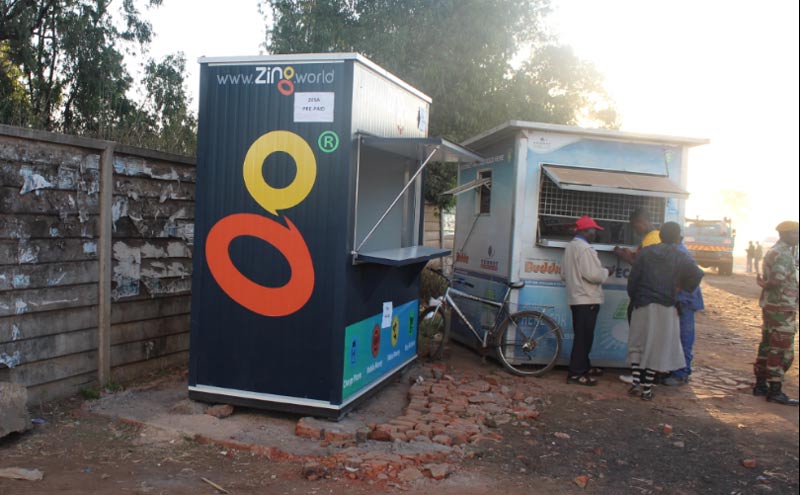 ZiNG ZW is currently working on a year-long roll-out of 1,000 booths around Zimbabwe, quite an impressive number that will plug ZiNG into the remotest parts of the country normally operated in by more established players.

What’s interesting about the model is how they are making of use of affinity groups: churches, youth organizations, community centers. They are tapping into vast social networks that already exist offline, cleverly getting around the problems of supplying marketplace liquidity that mobile telecoms, say, solve by simply tapping into their vast subscriber bases.

Working with these groups, are churches are a particular example, also reduces all the agent costs that they would have faced by trying to grow an agent base organically. Most obvious among these costs are things such as marketing the brand from scratch, managing risk, and recruitment.

Solid prospects for much growth: other areas

ZiNG ZW expects to complete the installation a thousand booths countrywide in one year (1000 units/12 months).

With their current model where one booth has 10 mobile entrepreneurs (MEs) tethered to it, this installation rate translates to an impressive figure of 10,000 jobs created, in a difficult economy like Zimbabwe, and outside established big distribution networks in the sense of mobile telecom networks like Econet.

No wonder the company easily speaks of empowerment of Zimbabwean communities as one of its major objectives, up there with even the company’s profit-making aims.

Probably the most exciting thing about ZiNG currently is how the network could grow even more, and expand its services into other areas like micro-lending and micro-insurance. The model certainly lends itself to that, with a network that is not only vast, but one that has pre-existing social ties as the cement binding individual members to one another.

Insurance and micro-lending are only two potential areas. Mobile money transfers are yet another. Once infrastructure of this high quality is in place, it’s hard to put limits onto the number of areas of business this network can be branched into.

It looks like it’s only a matter of time before these returnees hit the market big, new offerings.

5 thoughts on “Zing returns to Zimbabwe, the latest player in electronic vending space”