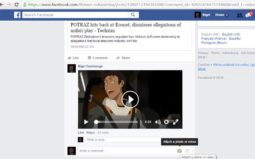 Facebook is always amplifying its value to its users, usually by launching one new awesome service after another.

Just yesterday it introduced 360 Photos, allowing users to share 360-degree photos taken from a 360 Photo app or a 360 camera.

The announcement was accompanied with links to some cool demonstrative 360-degree photos from NASA and a Paul Mccartney concert.

Facebook also introduced a video comments feature which was launched globally for users on Desktop Android and iOS.

Users can now make comments to all types of posts using an existing video recording from their gallery or by recording a new one just for the new comment.

By tapping on the camera icon next to the comments tab users can now post a reply or make a comment to all types of posts using an existing video recording from their gallery or by recording a new one just for the new comment.

These are pretty cool developments and the video comments feature actually follows the same “video first” trajectory that Facebook has been on in the past two years with features like mobile video broadcast.

There is however one reality that Facebook users in Zimbabwe are well aware of.

As much as our favourite social network continues to release these cool features and applications, they are still not so easily accessible to most people because of the huge costs associated with internet.

According to data from the telecoms regulator, the majority of Zimbabwean broadband users on Facebook rely on Facebook bundles which help limit the cost of connectivity to anything between $3 and $6.

They do however have data caps which means to access new features and really go all out using them (like video commenting every crazy photo or in every Group discussion) yo will need to buy more data which is still expensive.

Until the issues around the cost of internet are resolved we are still one step away from a full Facebook experience.