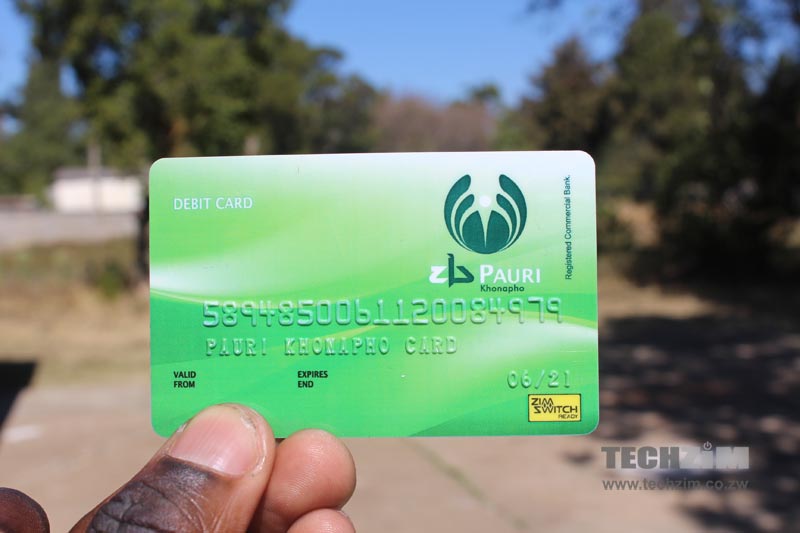 Earlier today we attended the launch of ZB Bank’s Pauri Card, the latest product from the financial institution that is meant to create another channel for financial inclusion.

The Pauri Card, which is open to any Zimbabwean with an ID number, allows a card holder to carry out various transactions on any ZB Bank platform or Zimswitch enabled POS terminal and ATM.

It is also linked to a mobile number and can be used to send money to any network along with interbank transfers. The minimum charge for sending money is 13 cents and the maximum is $3,50 with a $1,000 set as the maximum for daily transactions.

Other functions include the standard e-money services like airtime purchase, bill payments (including the purchase of ZESA prepaid vouchers) and an integration with ZB services that allows for transfers to and from any ZB account.

The card which costs 80 cents and requires no minimum balance is available from any ZB branch and ZB Agent bank with a  simple registration process.

What is the big idea behind this ZB Pauri Card?

The Pauri Card has integrated  a number of services into one product but as far as unique features are concerned it isn’t bringing much to the table.

Bill payments from cards and mobile wallets have been in the market for a while and ZB Bank’s competitors like CBZ Bank will be the first to dismiss this as another iteration of its own options like the Smart Cash Card.

Even Steward bank also has an easy-to-register card and account that will give a holder access to formal banking beyond what’s been sold by mobile money.

This strategy has been effected for years (remember Kingdom Bank’s Cellcard) especially as bankers realised that opening an account isn’t easy and the scores of frustrated Zimbabweans living in an informal economy now have a simpler alternative on their phone.

To be fair, though, it doesn’t look like ZB Bank is looking for a “never-been-seen-before” effect. The financial services group instead, seems to be focused on one major goal – offering a financial inclusion tool that can help it expand its use case and its presence among people who aren’t willing to open a bank account but are interested in some formal banking services.

The integration with mobile money services also helps ZB Bank maintain some relevance with the millions of mobile money users while embracing the reality that we’d all rather pay or send and receive money through a phone.

The card has also come at the right time, with ZB Bank growing its agent banking network which introduces their services to thousands of communities and a growing need for plastic money options.

If you put together the agent network with an easy to get card in an environment where anything but cash is the king, then you might see some of the growth that ZB Bank is expecting from this.

7 thoughts on “ZB Bank launches the Pauri Card, another tool for improving financial inclusion in Zimbabwe”