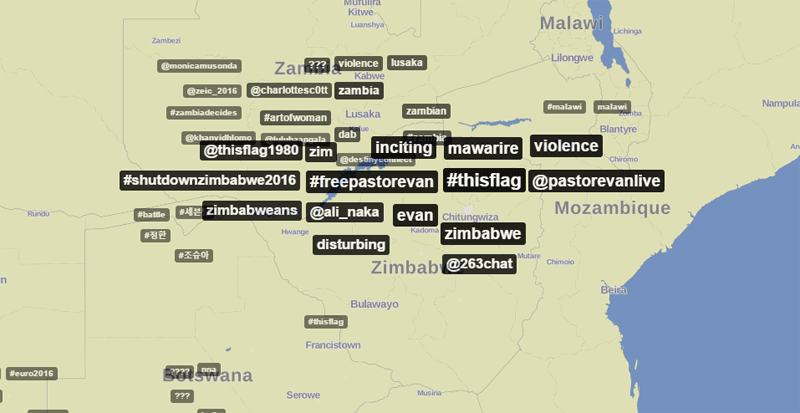 Current trending topics on Zimbabwe’s Twitter are all related to Evan Mawarire, the man behind the #ThisFlag movement which has gained significant momentum since April when it started. Pastor Evan, as he has come to be known, was arrested today apparently for “inciting public violence and disturbing peace”.

You can read more about his arrest here, here, here and there.

According to trendsmap, the following hashtags and accounts have been trending on since Mawarire’s arrest this morning: #FreePastorEvan, #ShutDownZimbabwe2016, Inciting, #ZimShutdown2016, @thisflag1980, @pastorevanlive, violence, #thisflag,  Evan, Mawarire, disturbing.

A topic trending on Twitter means the majority of Twitter users in Zimbabwe are tweeting about the topic.

While measuring conversation on Twitter is relatively easy because Twitter provides the means, it is likely the case that calls to #FreePastorEvans are trending on Facebook and WhatsApp too. WhatsApp is Zimbabwe’s most popular social platform.

Last week, the Government of Zimbabwe warned that anyone using social media in a way they deemed inappropriate risked arrest.

Here are some of the most echoed tweets on the #FreePastorEvans hashtag today:

The sad thing is not the harassment and brutality by the bad people but the silence of good people. #FreePastorEvan

When did he incite violence?? This is getting really pathetic. #FreePastorEvan

#FreePastorEvan! A man of peace, who fears God not man – detained for standing up against the oppression of Zimbabwe pic.twitter.com/u4QwVzpE87

You guys theyve done this ridiculous "helmet and button" dance before #FreePastorEvan pic.twitter.com/8TmrwvOBki

We SA citizens need to put pressure on SA Gvmnt to do more on #ZimShutDown2016 . #FreePastorEvan & let freedom reign pic.twitter.com/9ABdJK7xpf

#FreePastorEvan is now trending in Zimbabwe. Another spectacular own goal from ZANU PF