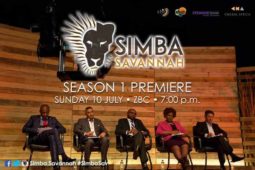 if you are a fan of local enterprise you might have noticed that a new reality TV show, Simba Savannah, premiered on ZTV on Sunday night providing viewers with a glimpse of Zimbabwean entrepreneurship and business innovation.

Modelled along the lines of The United States’ Shark Tank and the global business series Dragon’s Den, each episode of Simba Savannah has two different entrepreneurs pitching their business ideas to five Zimbabwean business leaders (called Simbas which is Swahili for lions) for investment and additional assistance such as mentorship and skills support.

We caught up with Tommy and got some additional information on the direction of the show and how entrepreneurs can be a part of the next edition.

We also got his perspective on the launch of Zimbabwe’s Dragon’s Den  – another reality business pitch show that will air later this year.

How do entrepreneurs get to be a part of it?

The show developed from a grass roots pulse. First with two years of Pitch Night and then with Innovation Baraza. We want to keep involvement at that level going forward so that there’s a thriving community that climaxes into the show. We’ll be letting people know how they can step up to the camera for season 2 in the coming weeks. Right now entrepreneurs and innovators can get involved in the conversation happening online, and be on the look out for upcoming Pitch Nights, or Innovation Baraza’s. We’ve managed to launch Pitch Nights beyond Harare with the recent launch in Bulawayo. we want the reach to be bigger.

Which stage does your business have to be at to participate?

The idea stages we are looking at are similar to the way pitch night presenters, and Innovation Baraza participants are selected. The project or idea should have some existing momentum or traction, apart from just a concept. A first sale, a prototype or beta site/platform.

Is there any direct relationship with Savannah Fund in East Africa?

Will there be incubation for the businesses or its just funding?

The incubation role in each deal made is key. I can say that all of the Simba’s have intentions of mentoring each innovator they commit too (as long as all info presented was accurate). It’s just as important as any cash funding. How much incubation? That’s really up to the Simba’s who pounce on the opportunities.

What sort of direction are you hoping for the show?

Launching more good ideas to the market. Connecting innovators to legitimate mentors and opportunities and educating and inspiring Zimbabwe. The bonus factor is that viewers enjoy the humour, candidness and personalities that dance around on set. I remember after the first few pitches in the making of the show one of the Simbas loudly declared on set. “I’m so impressed that these ideas are local and it makes me proud to be Zimbabwean.” That feeling should ripple into homes, and motivate entrepreneurs and to step out and do more.

Will the episodes be available online at some point?

Yes. We are working on that.

Who have you collaborated with on this project?

This has been the case of #collaborative brilliance in action. CMedia Africa are partners with Udugu Institute on this project but we’ve collaborated and received amazing support from our friends at the US Embassy, Emerging Ideas, and of course Steward Bank. And then of course… The Simbas.

There’s been an announcement that a Zimbabwean Dragon’s Den edition is set to go live this year. How are you distinguishing yourself from it?

I think what already makes this Simba Savannah unique is the community that was there before the show started, and the diverse set of partners involved in it who have been working with entrepreneurs at a grass root level in different ways. It evolved into a show. The dynamic personalities of the Simba’s create a completely unique comradery. As a local based story telling company, we had tons of fun producing the show – and hope people enjoy it. For the record – I think it’s great that there’s more initiatives being launched to propel Zimbabwean innovation.

23 thoughts on “Here’s our Q & A with the team behind Simba Savannah, Zimbabwe’s new business pitch reality show”