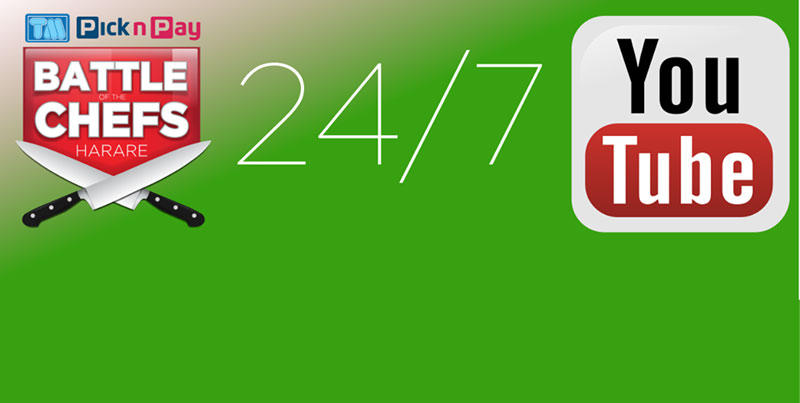 On Sunday 3 July Zimbabwean reality TV cooking show, Battle of the Chefs, will wrap up its 2nd edition in an anticipated season finale that will be broadcast on ZTV at 7 pm.

So far Battle of the Chefs has earned a lot of praise for a well-delivered reality show which is also arguably the best Zimbabwean production on television right now.

Its team, led by Joseph Bunga, has clearly been working hard to produce a quality show and as a result of this effort, it has secured investment of $150,000 while generating revenue through advertising for some big brands like TM Pick n Pay.

To ensure that as many people have access to the show Battle of the Chefs hasn’t been relying on just ZTV, though. The show is also available on the internet.

The Battle of the Chefs Facebook page and YouTube channel will flight the season finale and viewers can also catch the show’s earlier episodes there, along with added content like interviews with the chefs.

Making the show available online is a big deal. Not only is it great for viewers who won’t catch the show on a Sunday night either from ZTV apathy or preference for other alternatives, but it also offers the content to a huge audience outside Zimbabwe.

One of our findings in our Beneath the Surface feature on Zimbabwe’s internet Video Economy was that Zimbabwean content has a significant following from viewers outside the country, something which is likely a result of the Zimbabwean diaspora.

Being accessible online means that Battle of the Chefs not only packages itself as a VOD (video on demand) alternative, but it taps into a potential market of millions of Zimbabweans (as well as other nationalities).

This helps the case for its advertising based business model which is already catered for by the 3,2 million + potential Zimbabwean viewers and now is being extended through a massive online audience that can repeatedly access the show through virtual reruns.

Other productions like Tonight with Zororo have also used the internet as a platform for a series launch and its producer, Zororo Makamba, has extolled the benefits of an online broadcast route.

With branding of entertainment emerging as the most accessible monetisation strategy for Zimbabwean productions right now a blend of online and offline viewer numbers like what Battle of the Chefs has managed to do could be one way that internet producers expand their value proposition and earn greater returns on their work.